Maryland lawmakers led by the ‘pro tem’ team in Annapolis

Instead of hearing the clerk call out "Mr. Speaker" in the House, delegates heard the clerk punctuate the morning's business with the title "Madam Speaker." Inside the Senate, it was "Madam President" who was addressed by the clerk.
Listen now to WTOP News WTOP.com | Alexa | Google Home | WTOP App | 103.5 FM

WASHINGTON — Something was different in Maryland’s General Assembly Friday morning.

Instead of hearing the clerk call out “Mr. Speaker” in the House, delegates heard the clerk punctuate the morning’s business with the title “Madam Speaker.” Inside the Senate, it was “Madam President” who was addressed by the clerk.

The “pro tem” members of each chamber presided over the day’s business.

In the House, Speaker Pro Tem Adrienne Jones filled in for Speaker Michael Busch, who was out for a doctor’s appointment. Across the hall, Senate President Pro Tem Kathy Klausmeier stood in for Senate President Mike Miller.

Miller announced Thursday that he was being treated for prostate cancer, and that he would be out receiving chemotherapy periodically during the 90-day legislative session.

Klausmeier said Thursday that she would work hard to keep the Senate running to the best of her ability in Miller’s absence. She was clearly aware of the size of the job: She’d be filling the shoes — even on a temporary basis — for the longest-serving state Senate leader in the country. Miller’s grasp on power has made him a formidable figure in Annapolis and across Maryland.

During the Senate session Friday, state Sen. Nancy King noted the unique circumstances of the day’s events. She stood to address her colleagues to make an observation.

“I think this is the first time in history that we have a woman presiding in the House and the Senate” at the very same time on the same day, King said.

Thursday’s news from Miller shook lawmakers used to working alongside a man who had been in a leadership position for 33 years, but they were also eager to give their support to Klausmeier.

When she gaveled Friday morning’s session to a close, several voiced their encouragement, calling out “good job” and “excellent.” 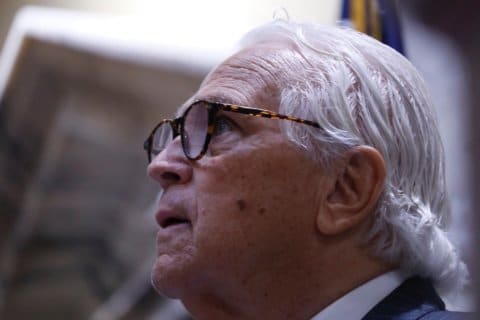