Here are the damage survey results from an EF-1 tornado that struck the Mt. Airy area in Carroll County last evening. Public Information Statement can be found at the top of our website at https://t.co/2AXFNweZIf pic.twitter.com/99Q6aaWmwp

An EF-1 tornado touched down around 8:20 p.m. one mile south of Interstate 70 in the extreme northwest of Howard County. An EF-1 tornado has a wind speed between 86 to 110 mph.

It quickly moved into Carroll County, downing numerous trees in the Pheasant Ridge area. It continued into Mount Airy, causing damage to a gas station canopy and buildings in a retail area.

In Carroll County, NBC Washington reported severe storm damage on Friday in the vicinity of Mount Airy. Meteorologist Doug Kammerer said that numerous trees were down, and some buildings suffered considerable structural damage.

“A TJ Maxx, a few mobile homes and other homes were actually heavily damaged. A lot of trees down, power outages in that region as well,” Kammerer said, adding that a “tornadic signature” was visible on weather radar where the most damage was reported.

The tornado then traveled north causing damage to structures in Knills Farm Market. It reached a maximum wind speed of 100 mph and snapped several power poles and trees. The last evidence of the twister was observed on Gillis Falls Road.

The National Weather Service had issued a Tornado Warning for the Mount Airy area around 10:30 p.m.

Home Goods and TJ Maxx stores were condemned by a building inspector due to severe roof damage, a spokesman with the Mount Airy Volunteer Fire Company said. He also said that the storm damaged three mobile homes in the Pheasant Ridge mobile home park.

In Baltimore, the National Weather Service confirmed that an EF-1 tornado with a maximum wind speed of 105 mph touched down in the area on Friday. Two people were killed and one person hurt when an Amazon sorting facility collapsed. 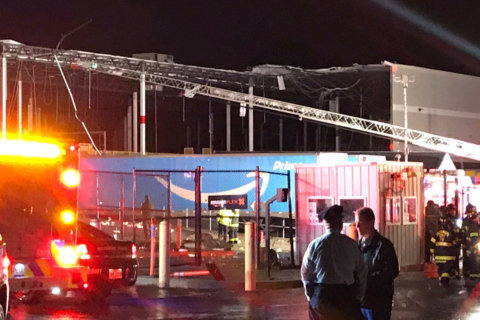