Even before a sudden move by Senate Republicans Friday to request an FBI probe of Supreme Court nominee Brett Kavanaugh, Maryland Gov. Larry Hogan and the state's two senators were calling for just such an investigation.

WASHINGTON — Even before a sudden move by Senate Republicans Friday to request an FBI probe of Supreme Court nominee Brett Kavanaugh, Maryland Gov. Larry Hogan and the state’s two senators were calling for just such an investigation.

Sens. Ben Cardin and Chris Van Hollen, both Democrats, said they supported the GOP move, initiated by Sen. Jeff Flake, R-Ariz., to postpone for one week a full Senate vote on the confirmation of Kavanaugh until the FBI investigates the charges of sexual misconduct against the judge.

The Senate Judiciary Committee voted 11-10 to send Kavanaugh’s confirmation to the full Senate.

Before Friday’s party-line vote, Flake said he would vote “Yes” in the committee, but asked for the delay on the full Senate vote so an FBI investigation can be completed into allegations by Christine Blasey Ford that Kavanaugh assaulted her in a Montgomery County, Maryland, home in the 1980s. Kavanaugh also has been accused of sexual misconduct by other women.

After repeated calls for a pause on the Kavanaugh confirmation, Maryland’s senators voiced support for the FBI investigation, even if it took longer than a week.

In a tweet, Van Hollen urged Trump to order a full FBI investigation into the allegations against Kavanaugh and criticized the one-week time limit.

“(Senate Majority) Leader (Mitch) McConnell must wait for the results of that investigation before there is any vote on the Senate floor,” Van Hollen tweeted. “The truth is nonpartisan.”

Facts matter. President Trump must order a full FBI investigation into all of the allegations against Kavanaugh without delay. Leader McConnell must wait for the results of that investigation before there is any vote on the Senate floor. The truth is nonpartisan. https://t.co/TSHLnQ5anD

Cardin praised the decision to investigate, but said in a statement that the probe should have taken place before the Senate Judiciary Committee voted on the nomination. He also criticized the one-week time limit.

“The FBI should be given as much time as they need to complete such an investigation without any arbitrary limits,” he said. “For me, this has always been about getting to the truth.”

He also tweeted, “But if today can force the White House to finally direct the FBI to take action on filling in important details, it should move us in the right direction.”

An FBI investigation should have taken place before the Judiciary Committee voted on #Kavanaugh, not afterward. But if today can force the @WhiteHouse to finally direct the FBI to take action on filling in important details, it should move us in the right direction.

Neither Van Hollen nor Cardin are on the judiciary panel, but both have opposed Kavanaugh since Trump announced his nomination on July 9.

Rep. Elijah Cummings, D-Baltimore, a ranking member on the House Committee on Oversight and Government Reform, said Thursday that he, too, supported an FBI probe and believed Ford.

Hogan and Republican governors from several states, including Ohio and Vermont, also requested that the confirmation process be slowed.

Scott Sloofman, a Hogan spokesman, said Thursday that the governor believes there should be a full investigation before the confirmation moves forward. He could not be reached for comment Friday.

On Thursday, the judiciary panel heard testimony from Kavanaugh and Ford. She gave an emotional and sometimes tearful account about an alleged sexual assault perpetrated by Kavanaugh 36 years ago when both were in high school.

Ford testified that she was pulled into a bedroom at a party before a drunken Kavanaugh got on top of her. She said a second teen, Mark Judge, was also in the room. Ford said she feared for her life during the attack, and had lasting trauma from the experience.

A vote to subpoena Judge to testify to the committee did not pass. But on Friday, Judge expressed his willingness to cooperate confidentially with investigating agencies.

Judge had earlier submitted a letter to the committee, saying he did not wish to participate in the hearings but had no memory of the incident.

Moments before the committee’s vote, Flake said he would vote to move Kavanaugh out of the committee, but wouldn’t be comfortable voting to approve him until the allegations were further vetted.

“I think it would be proper to delay the floor vote for up to but not more than one week in order to let the FBI to do an investigation, limited in time and scope, to the current allegations that are there,” Flake told his colleagues.

After a lengthy meeting in McConnell’s office, the Republicans agreed to request an FBI probe and White House officials later said President Donald Trump would direct the agency to conduct the investigation into his nominee. 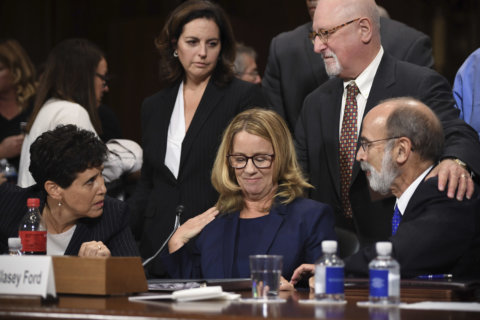