"Jordan was fearless, he was a dreamer. He would do anything for his teammates," said Ellis McKennie, a junior on the University of Maryland football team.
Listen now to WTOP News WTOP.com | Alexa | Google Home | WTOP App | 103.5 FM
(1/4) 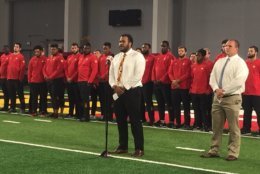 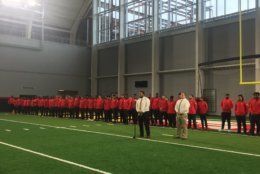 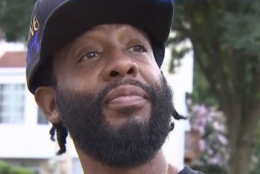 COLLEGE PARK, Md. — The University of Maryland football team gathered Monday to share plans to honor Jordan McNair, the 19-year-old offensive lineman who collapsed after a May practice and died from heatstroke two weeks later.

His teammates came together to share their plans to memorialize McNair.

“Jordan was fearless, he was a dreamer. He would do anything for his teammates,” said Ellis McKennie, a junior on the University of Maryland football team. He spoke at the university’s Cole Field House with his teammates lined up behind him.

“This season, every game we will be wearing a helmet sticker with the number 79 on the back. This is the number Jordan wore during his time here at Maryland,” McKennie added.

No member of the football team will wear McNair’s number for the next three years — the time during which he would have been eligible to play. In addition, a moment of silence will be held during Texas and Temple games, and his locker will be encased in glass.

McNair will also be honored on senior day with his class and he will be honored at his senior graduation ceremony.

The team plans to award a scholarship to a Maryland football student athlete in McNair’s honor every year.

McNair was running laps on the practice field on May 29 when he was overcome by heat and exhaustion. After being treated at the team facility, he was taken to a hospital and died of heatstroke on June 13.

The school has apologized to the family and acknowledged that mistakes were made in his treatment during the May 29 workout.

Last week, the university system’s board of regents decided to take over the investigation into McNair’s death.

Questions remain about whether there will be staff changes within the athletic department at the University of Maryland following McNair’s death.

Former board member Tom McMillen said it’s too early in the probe for decisions to be made on whether officials like President Wallace Loh and Athletic Director Damon Evans should remain in their posts.