Maryland officials are asking anyone out on the water to keep an eye out for an invasive species known as the Chinese Mitten Crab.
Listen now to WTOP News WTOP.com | Alexa | Google Home | WTOP App | 103.5 FM

MARYLAND — Maryland officials are asking anyone out on the water to keep an eye out for an invasive species known as the Chinese Mitten Crab.

The animal first made an appearance in the U.S. in the 1980s and has come and gone since then.

It has also been spotted in the Cheasapeake Bay over the years. While the population has gone down substantially, scientists are now raising concerns there may still be some lurking in the waters. 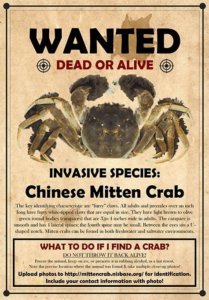 The crab is known to disrupt ecosystems and eat fish eggs, proving to be a threat to other crab species.

With it’s distinct claws that appear to be furry or covered in algae and a light brown or olive green body, they can grow up to 4 inches wide.

The animals can also be found in both freshwater and saltwater.

Anyone who spots one should not throw it back into the water, but put it on ice or freeze it, take photos and note the location where it was found.

All sightings should be submitted to the Mitten Crab website.