One bill will provide dedicated funding to Metro, something both the governor and lawmakers in attendance agree is historic.

“We’ve been struggling for 40-some-odd years to get what every other system of its kind in the country has, which is a dedicated funding stream,” said Democratic state Sen. Brian Feldman, who sponsored the bill that will set aside $167 million in state money for Metro every year.

As he signed the bill, Hogan — a Republican running for re-election — thanked lawmakers who worked on the measure. Noting that the region went ahead with Metro funding without a four-way split with the federal government chipping in, Hogan said, “We worked together with Virginia and the District of Columbia to step up and take even further funding actions.”

Metro General Manager Paul Wiedefeld attended the bill signing as well, joking, “I’ll be very brief — I’ve got a lot of money to spend, got to get to work!” But getting serious, he said: “What I hear from our customers is one thing: They want it safe and reliable. And they want it now. These dollars allow us to get there.”

“This is the biggest economic-development opportunity in a generation — perhaps in a lifetime,” said the governor, as he prepared to sign the other bill into law. Maryland’s PRIME Act provides billions in incentives to Amazon, contingent on the giant retailer hitting a number of benchmarks along the way.

Montgomery County Executive Ike Leggett was credited with pushing hard to get the Amazon bill through, and recalled telling lawmakers they’d have to “go big or go home.”

“I was not prepared to go home,” said Leggett.

The county executive took the opportunity to thank the Montgomery County Council members, with whom he’s sometimes clashed.

“Because all of that trash talk that I was talking about Montgomery County stepping forward: I am signing a big check, and they’re going to have to cash it,” he said. 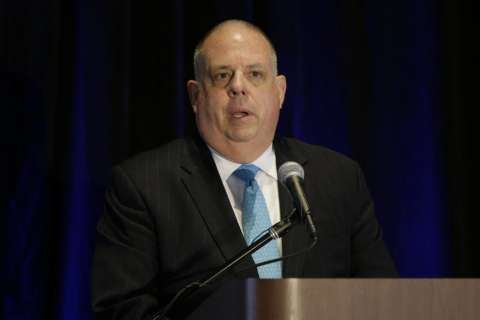