The uncle of toddlers killed in a house fire in St. Mary's County has set up a GoFundMe account to go toward the funeral expenses of his niece and nephew.
Listen now to WTOP News WTOP.com | Alexa | Google Home | WTOP App | 103.5 FM

WASHINGTON — The uncle of two children killed in a house fire in St. Mary’s County, Maryland, has set up a GoFundMe account to go toward the funeral expenses of his niece and nephew.

Three-year-old Kaleb Johnson and his sister 2-year-old Kassidy died in the blaze that broke out at 28603 Point Lookout Road in Loveville around 4:40 a.m. Tuesday.

The house did not have any working smoke alarms, St. Mary’s County fire officials said.

Kassidy’s and Kaleb’s uncle, Steve Topolski said the family is devastated by what has happened.

“The money, the prayers, just the comments, the response has been overwhelming and the family greatly appreciate everything everyone is doing … it warms my heart to know there are so many within St. Mary’s County, for one, that still care about their neighbor.”

Four victims were flown to area hospitals with non-life threatening injuries, following the fire. They are Kelsey Davis, who’s the mother of the two children who died in the fire, and her sister Autumn Bowles, along with Bowles’ two children, a 1-year-old and a 2-month-old baby.

Davis is going to be in the hospital a minimum of 11 days because she is severely burned, according to Topolski. Bowles and her children are expected to be released Wednesday.

The children who died were taken to the chief medical examiner’s office in Baltimore to determine how they died. Two dogs also died in the fire, fire officials said. 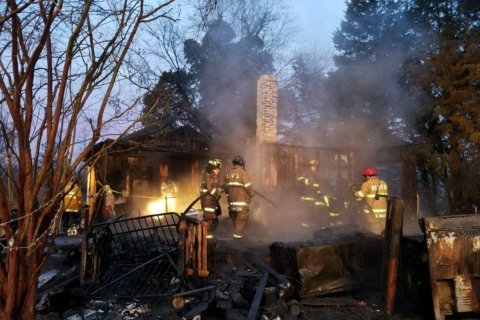