A Maryland legislator would like to improve safety on the state's roads even further, by protecting those who work to maintain them.

WASHINGTON — When Maryland drivers spot emergency vehicles, such as police cars or fire trucks along the side of the road, they need to move over one lane or slow down. It’s the law.

And a Maryland legislator would like to improve safety on the state’s roads even further, by expanding that law to such service vehicles as State Highway Administration mowers or trash and recycling trucks.

“We need to do more in the legislature to keep drivers from running into these people that are out there trying to help us,” said Maryland state Sen. Wayne Norman during a Senate Judicial Proceedings Committee hearing Tuesday afternoon. Norman represents Cecil and Hartford counties

During that hearing, some of the workers the bill is designed to protect spoke about their experiences working along state, county and municipal roadways.

“When you’re mowing the grass, you’ll see tractor trailers fly by you at anywhere from 50 to 90 miles an hour. It’ll shake your truck,” said Brian Ross, a state highway employee. He also told committee members about a friend who also worked for the State Highway Administration.

“He got hit by a guy in a car,” Ross said. “Knocked him about 150 feet. He’s still not back to work, and this happened three years ago.”

Kenneth Nugent, who works at the administration’s Gaithersburg facility, told a similar story. He and a colleague were working when their vehicle broke down along a Montgomery County road. Traffic had come to a stop.

“My friend was standing on the shoulder of the road directing traffic,” Nugent said. One driver, he said, apparently couldn’t wait and drove around the truck.

“This gentleman came through there at a full rate of speed, hit him and threw him about 75 yards into a field. My friend is currently disabled and unable to work,” he said.
Mayor Craig Moe of Laurel also testified in favor of the bill, explaining that a member of his city’s public works crew was killed just over a year ago.

“He never had a chance” Moe said, explaining that the SUV that hit 30-year-old Marcus Colbert pinned him to the trash truck that Colbert was working on. His father, Ralph Brent — who worked for the Laurel Department of Public Works for more than 20 years — said he used to drive his son to work every day.

“I don’t have that anymore,” Brent said. He said that if he could leave lawmakers with one thought it would be to ask everyone to slow down.

Major delays in Md. after pedestrian struck on US 50 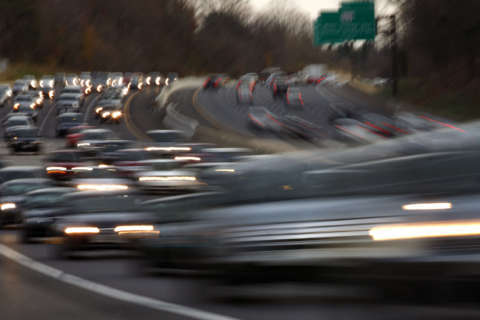 Maryland ranks among worst states for drivers in report