LINTHICUM, Md. — Around 400 professionals from the transportation and construction industries gathered in Maryland Wednesday, hoping to land a spot working on a massive project to ease traffic congestion in the region.

Those who attended the meeting, hosted by Maryland’s Department of Transportation at the BWI Airport Marriott, represented hundreds of companies from around the world.

“Everyone in this room wants to work on this project,” said Pete Rahn, the state’s transportation secretary. “Not only do we have national companies here but we have international companies.”

It is all part of a $9 billion proposal first announced in September by Gov. Larry Hogan, who called the idea “absolutely transformative.”

State transportation officials said it would be managed as a public-private partnership with private developers designing, building, operating and maintaining the new lanes.

Wednesday’s gathering was about finding the right people for the job.

“Various companies are using this opportunity to team up with others to try to create the perfect team that will allow them to win a portion of this program,” said Rahn. “We’re going to have good competition which should mean we get a very good value for Maryland taxpayers.”

During a recent meeting with Montgomery County lawmakers, Rahn said he believed construction could potentially begin in less than five years.

The state also wants to add four express lanes to the Baltimore-Washington Parkway, although that project would not be part of any public-private partnership.

Building new toll lanes on the parkway is more complicated because it requires the U.S. Interior Department to transfer the parkway land, which the federal government owns, to the Maryland Transportation Authority. Hogan said he met with Interior Secretary Ryan Zinke to kick-start the process. 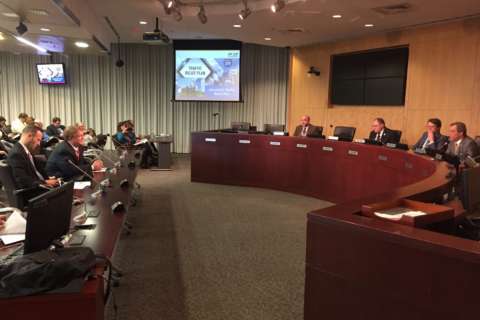