WASHINGTON — The Purple Line could be on hold indefinitely, after a federal judge issued a long-awaited ruling Monday that finds the state of Maryland and the Federal Transit Administration “have failed to take the requisite ‘hard look’ at the potential impact” that declining Metro ridership and safety issues could have on the proposed rail project.

U.S. District Judge Richard Leon had sided with groups challenging construction of the line last August, and asked the FTA then to decide whether a supplemental environmental impact statement was needed to address changes in Metro ridership since Purple Line plans were finalized.

The FTA found that many riders would use the new line regardless of Metro’s situation, which could be improved by the time the Purple Line opens anyway.

In Monday’s ruling, Leon said the FTA simply relied on information it had before his ruling last year.

Leon said there is a dispute over material facts in the case, and therefore he would not lift his hold on the project.

“FTA boldly concluded that there is no need for an (environmental study), and the Purple Line will meet its established purposes, no matter what happens to WMATA Metrorail. To say the least, this is a curious conclusion,” Leon wrote in the ruling.

He said the FTA should have provided more of a response to experts hired by those opposed to the Purple Line in this lawsuit, and, since the agency did not, its decision to move forward was arbitrary.

He ordered the FTA and Maryland to prepare a supplemental environmental impact statement “as expeditiously as possible”.

Leon also pushed back against the appearance of delay in his rulings, saying he had been working diligently on the case.

The state of Maryland had argued that the extensive delay and the threat of more delays with an order like this one could lead to extra costs the state might have to pay its private partner and even the cancellation of the rail line between New Carrollton, College Park, Silver Spring and Bethesda. 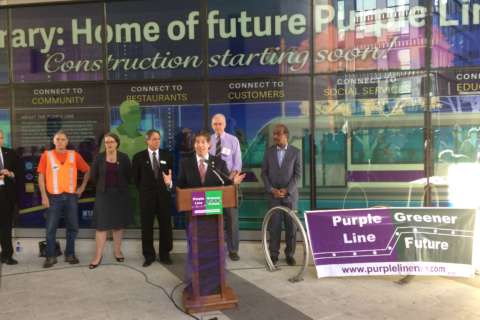