While the eagle cameras are amazing, bird lovers might want to stretch their wings a little and check out some other amazing cams of fine, feathered friends online.
Listen now to WTOP News WTOP.com | Alexa | Google Home | WTOP App | 103.5 FM
(1/3)

WASHINGTON — The eagle cameras are off-the-charts popular, but bird lovers might want to stretch their wings a little and check out some other amazing bird cameras online.

The stars of the Chesapeake Conservancy’s wildlife webcams are back: the peregrine, the heron and the osprey.

Jody Couser, a spokeswoman for the conservancy, said the peregrine falcon was on the brink of extinction due to DDT, a pesticide used in the 1970s.

“Conservationists, including those from the Peregrine Fund, worked very hard to bring the species back,” she said.

Couser said that in the ’70s, conservationists released a peregrine over the Chesapeake Bay.

“That peregrine flew off and landed on the 33rd floor of the Transamerica Building, which continues to be a nest for that family generations later,” she said.

That peregrine cam is in downtown Baltimore.

Peregrines usually nest on the side of cliffs; Couser said a skyscraper was the next best thing.

You can also view the great blue heron camera, which is located on the Eastern Shore. The herons live in colonies called rookeries. Couser said the heron rookery is like a prehistoric visit to another age.

“If you’ve ever heard a heron communicate they sound like a pterodactyl,” she said. “They have a squawk that’s like none other.”

Couser said the heron rookery is home to 10 to 12 nests and up to 50 herons during the height of the nesting season.

“It’s truly remarkable,” she said. “The last time that I visited that property where the heron rookery is located, there were 30 to 35 heron, which are quite large birds.”

She said the heron nests are located on the top of 80- to 100-foot tall loblolly pine trees that sway in the wind.

“It’s really remarkable that they can even hang on some times,” she said.

Couser said their eggs are huge and are a beautiful shade of blue. But she said the nests get so crowded because there is a mom, dad and as many as seven babies.

The eggs take 28 days to incubate, but she said once the heron hatch, they hang around the nest for about 60 days.

“It is incredible to watch them grow, all of those large birds in one nest,” she said.

Then there’s the osprey cam.

Couser said the osprey spend their winters in South America and the Caribbean and return back to the Chesapeake usually around St. Patrick’s Day.

Audrey’s mate, Tom, came back over the weekend, she added.

She said the osprey are not banded or tracked, but that the property owners (who are known as the “Crazy Osprey Family”) where the nest is located on Kent Island have been tracking the birds for years.

Couser said Explore.org is sponsoring all three of the live-streaming webcams this year.

She also said the conservancy was very concerned over potential budget cuts to the Chesapeake restoration.

“We just want to remind everybody that these birds are a beautiful symbol of what we can accomplish when we set our minds to it because both the osprey and the peregrines were once almost extinct,” she said. “But conservationists worked very hard and brought them back from the brink of extinction, and now we’re all enjoying them today.” 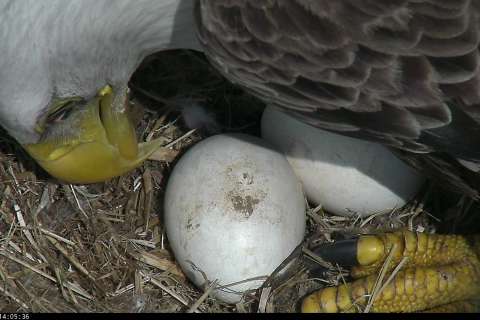