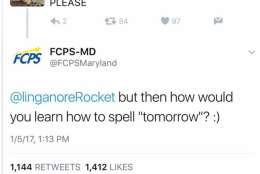 WASHINGTON — Frederick County Public Schools has fired an employee over her reply to a student’s Jan. 5 tweet to “close school tammarrow PLEASE.”

Katie Nash told the The Frederick News-Post, that she was terminated from her $44,000-a-year job as web experience coordinator after replying, “But then how would you learn how to spell ‘tomorrow?’ :)”.

The clever reply got quite a bit of attention on Twitter before it was deleted. It even inspired the hashtags “#KatiefromFCPS” and — after Twitter feared she was no longer running the account — “#FreeKatie.”

But while even the recipient of Nash’s reply thought the tweet was in good fun, the district apparently wasn’t comfortable with her approach and dismissed her Friday.

A Frederick County Public Schools spokesman confirmed that firing but didn’t provide details. Nash herself said that she understands why she was let go and that she didn’t “want to be a distraction to the school system.”

Nash is taking her dismissal in stride, tweeting yesterday: “Wish success for FCPS, students deserve the best. Don’t regret a tweet. #katiefromFCPS says do  ur homewurk [sic] – no one takes away ur education.”