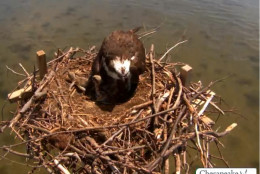 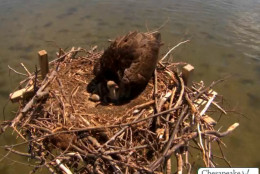 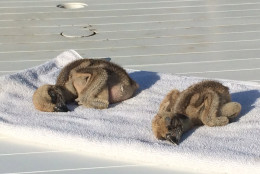 WASHINGTON — A pair of Maryland osprey have adopted two chicks to raise after their own eggs didn’t hatch, according to the Chesapeake Conservancy.

The pair, known as Tom and Audrey, can be seen on the conservancy’s osprey cam raising the chicks along the shores of Kent Island.

The chicks originated from an endangered nest on a piling used by barges at Poplar Island. The eggs were transferred to a neighboring nest and were incubated along with several others until they hatched recently. The two rescued chicks were taken to Kent Island to meet their new mom and dad Wednesday.

Tom and Audrey tended to three eggs of their own all spring even though biologists knew no chicks would come from those eggs, according to the conservancy.

The conservancy says the pair has readily accepted their hatchlings.

Osprey mate for life and return to the Chesapeake each year to nest. These birds are considered an indicator of the overall health of the bay because they eat almost entirely fish and are sensitive to environmental contaminants.

Watch the hatchlings get to know their new parents on the conservancy’s osprey cam.