Holidays: 'Enchant' shines with millions of lights in Nats Park | Where to see holiday lights | Send in photos of decorations | How to give greener this season
Home » Loudoun County, VA News » Loudoun Co. sheriff seeking…

A man robbed a gas station’s convenience store in Sterling, Virginia, Thursday night, according to Loudoun County Sheriff’s Office. The suspect walked in and out of the gas station several times, according to deputies, before committing the alleged strong-armed robbery.
Listen now to WTOP News WTOP.com | Alexa | Google Home | WTOP App | 103.5 FM

The man walked in and out of the Exxon gas station — in the 23000 block of Pacific Boulevard, near Dulles International Airport — several times before committing the alleged strong-armed robbery at around 11 p.m., according to a statement from the sheriff’s office.

The man reached over the store’s counter and grabbed the clerk’s arm, taking items in her possession, according to the statement. Deputies said the suspect fled the store with the stolen items as well as a pair of sunglasses he had taken off a shelf and worn while in the store. 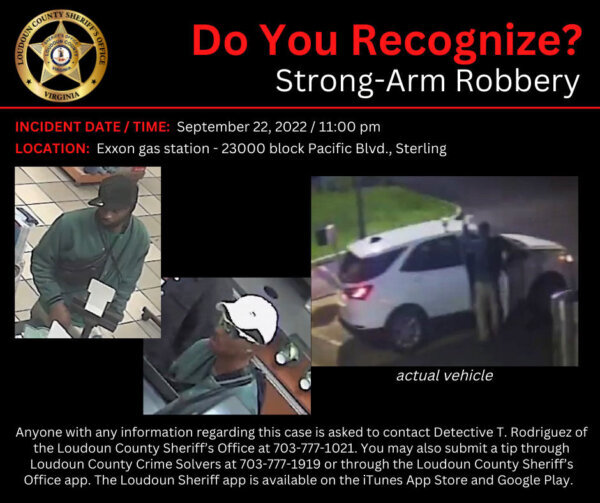 Detectives with the Loudoun County Sheriff’s Office said the suspect, a man in his 20s standing roughly 5 feet 9 inches, left the gas station in a white SUV along with a female passenger.

Below is the approximate location of where police said the robbery happened: