Coronavirus News: Fairfax Co. votes to increase substitute teacher pay | Is it time to get a COVID-19 booster? Which one? | Local cases of COVID-19 | How many in DC region are vaccinated?
Home » Loudoun County, VA News » Parents, teachers against Loudoun… 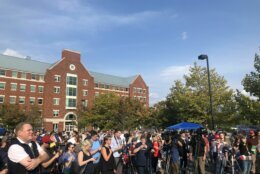 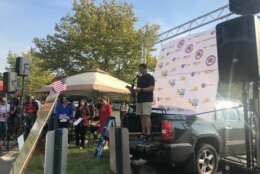 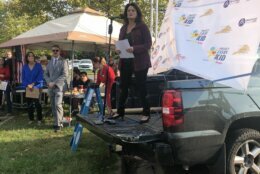 As the school board prepared for its regular meeting inside, rallygoers outside listened to speakers criticize the actions of the board, in particular, the policy allowing transgender students to use bathrooms and locker rooms based on their gender identity and requiring teachers and staff to refer to students by their preferred pronouns.

The crowd cheered as teacher Tanner Cross began his address to the crowd. Cross is the Leesburg Elementary School physical education teacher who was suspended by the school system for speaking out against Policy 8040 when it was first proposed. The Virginia Supreme Court sided with a judge who ordered that Cross be reinstated.

“My win is a win for all teachers across the country who want to stand up for the good of their students,” Cross said.

Cross is opposed to the policy’s requirement that teachers use a student’s preferred pronoun when it conflicts with the student’s biological gender. Cross and other speakers condemned the policy as harmful lying to students, while forcing teachers to say something against their conscience and religious faith.

“For my students confronting very sensitive and difficult and complicated questions about who they are, my goal is to give my students the love and the understanding and the emotional support that they need. To do this, I also have to always be honest. I have to be honest with my students in a way that’s best for them. Because of this I cannot support Policy 8040,” said Monica Gill, a 26-year veteran teacher who teaches history at Loudoun County High School.

Gill is one of two other teachers who joined Cross in a lawsuit filed against the policy. They’re asking the Loudoun County Circuit Court for an immediate injunction against the policy, while their lawsuit proceeds.

The teachers are represented by Alliance Defending Freedom, a legal group which advocates issues including religious freedom and free speech.

The Loudoun County school system has said that the transgender student policy is consistent with Virginia state law,

Among the rally speakers were parents who condemned the school board for the policy.

Earlier this month, the school board unanimously approved a professional-conduct policy intended to assure teachers and staff maintain their free speech rights.