A Loudoun County, Virginia, resident who is caregiver to her mother with Alzheimer's disease, is eager to see whether a new drug to address the condition receives federal approval.
Listen now to WTOP News WTOP.com | Alexa | Google Home | WTOP App | 103.5 FM

A Loudoun County, Virginia, resident who is caregiver to her mother with Alzheimer’s disease, is eager to see whether a new drug to address the condition receives federal approval.

The Food and Drug Administration is expected to announce by Monday whether it will approve Aducanumab, which would treat Alzheimer’s disease. Sara Bach, of South Riding, can hardly wait.

“We’re praying it gets approved by the FDA,” Bach said. “I think it would be life-changing to have at least a little glimmer of hope.”

Bach lost her grandmother to Alzheimer’s disease. Her mother was diagnosed four years ago at 61 with early-onset Alzheimer’s.

Bach is excited about the possibility the drug might slow down declines in cognition and function.

“I think this medication has such potential to allow people like my mother the opportunity to experience life events, like the birth of their grandchildren and weddings,” Bach said.

“For example, my brother is getting married this August. It’s great that we can have my mom there, but it’d be great if we could have her all there — including her mentally.”

Bach said it’s tough being a caregiver to her mom and her children, ages 8 and 5.

“They don’t understand that Grandma looks like she’s fine. Appearance-wise, she looks like she’s 100% healthy, but mentally she’s not,” Bach said. “That’s a difficult conversation to have with my children and other people my mother needs to interact with — to help them better understand Alzheimer’s and the impacts it has on her.”

Bach is volunteering with the Alzheimer’s Association, and is advocating and talking with WTOP to help shine a light on the disease.

She’s also fundraising and encouraging people to participate in The Longest Day, an annual event being held June 20.

“I just want people to be aware of this disease and that it impacts such an enormous number of people in or population,” Bach said.

“It not only impacts the individual with Alzheimer’s, but it’s an incredibly hard journey for caregivers as well – emotionally, mentally and financially.”

Here are some general facts about Alzheimer’s disease:

You can learn more about the disease at the Alzheimer’s Association website. 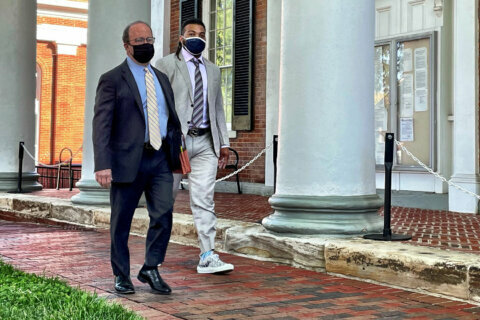