Home » Loudoun County, VA News » Back to school in…

Back to school in Loudoun Co. means 2 new schools

A new high school and a new elementary school — both in Ashburn — are officially opening their doors as the new school year begins. All told, nearly 84,000 students are enrolled this year in Loudoun County Public Schools — about 1,500 more students than last year, according to school district figures.

It’s back to school in one of Northern Virginia’s largest and fastest-growing school systems.

And some of the thousands of students returning to classes Wednesday in Loudoun County, Virginia, will be streaming through the doors of brand-new schools.

A new high school and a new elementary school — both in Ashburn — are officially opening their doors as the new school year begins. 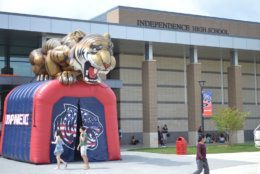 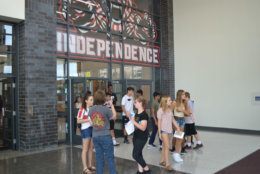 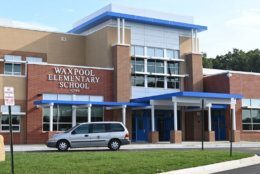 All told, nearly 84,000 students are enrolled this year in Loudoun County Public Schools — about 1,500 more students than last year, according to school district figures.

Over the past five years, the student population has jumped by more than 10,000 students.

Serving the Brambleton area of Ashburn and fed by Brambleton Middle School, the high school will open with between 1,000 and 1,100 students. For the first year, the school will not have a senior class, which Williams said is typical. The principal is John Gabriel, the former principal of John Champe High School in Aldie, who was honored in 2017 as the school system’s “principal of the year.”

The two-story, 282,00-square-foot high school sits on about 85 acres. Construction was completed over the summer.

“When I was over visiting the school recently, it was just beautiful walking in,” Williams said. The building features a “state-of-the-art” security vestibule, broad hallways and high ceilings and what he called “impressive” athletic facilities.

Despite not having a senior class, the school will feature a full roster of varsity-level sports competing under the mascot of the Tigers.

“The first football game is in late August. The marching band has been practicing. So, Independence High School is ready to go,” Williams said.

In addition, Waxpool is one of the first elementary schools in the county to include a heavy emphasis on computer science, coding and overall “computational thinking,” Williams said.

The school system, overall, is in the second year of a three-year plan to hand out Chromebook laptops to all students in grades 3 through 12. This year, the project expands to 60,000 students. By the start of next school year, all students in those grades will have laptops, Williams said.

The superintendent said the focus isn’t on the laptops themselves but about “supporting deeper learning” and ensuring all students have access to technology and to information.

Another new development on the technology front: Schools are rolling out a system called “Permission Click,” which will allow parents to sign permission form for field trips online. “They don’t have to worry about it if they sign it, does it end up stuck still in their son or daughter’s backpack?”

It’s an expansion of the school system’s “Virtual First Day” program, which allows parents to sign a host of forms and authorization forms online.

There are also changes coming to the elementary school curriculum, with a focus on “social-emotional learning,” Williams said.

The effort, which starts this year at 40 elementary schools, is about encouraging resilience and improving students’ mental health. It follows similar efforts at the high-school and middle-school level in the past two years to provide mental health support teams made up of social workers, psychologists and school counselors.

Also of note: Full-day kindergarten, which expanded to all kindergarten students last year, will continue this year, Williams said.

When Williams took over as superintendent five years ago, only 11 percent of kindergarten students participated in full-day kindergarten. He praised the school board for making universal all-day kindergarten a “real priority in terms of planning, to make sure we’re opening new schools as soon as possible so we can have the space needed and allocating the dollars necessary to hire the teachers needed.” Getting ready for high school: gear and strategies Is teaching writing as important as teaching reading?