After a life of service to country, and fellow wounded veterans, Marine Sgt. Rob Jones is looking forward to being able to do more things most homeowners take for granted. See photos and video.
Listen now to WTOP News WTOP.com | Alexa | Google Home | WTOP App | 103.5 FM
(1/15) 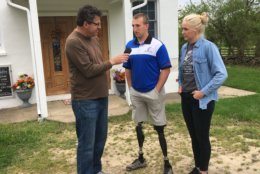 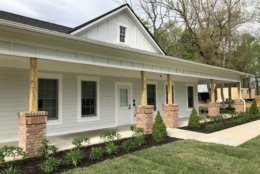 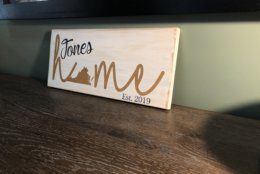 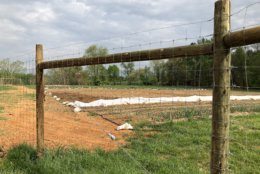 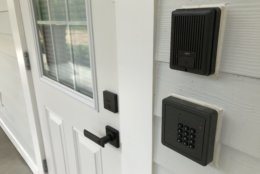 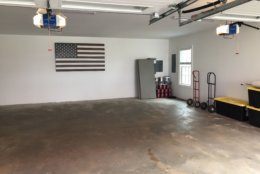 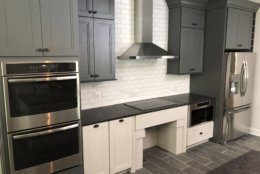 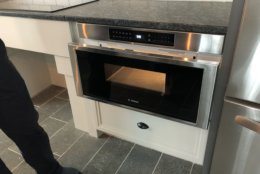 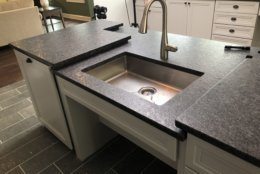 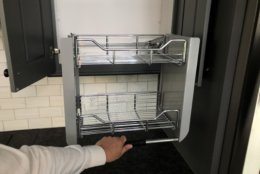 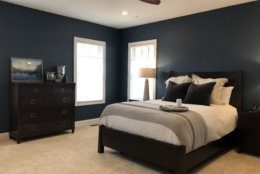 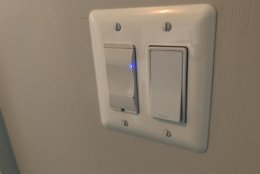 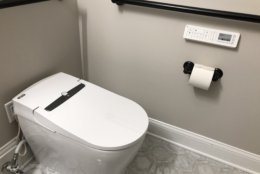 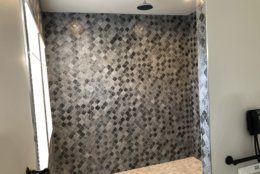 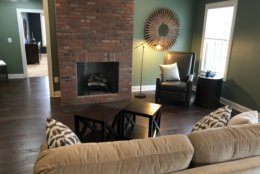 For a U.S. Marine who lost both legs above the knee to a land mine in Afghanistan, running 31 marathons in 31 days to raise money for veterans’ charities was easier than washing his body at home.

“Every time I want to get into the shower, I have to haul myself over a shower into a bathtub,” said Sgt. Rob Jones, standing on two prosthetic legs on the hilly unpaved parking lot of a church in the hills of Loudoun County, Virginia.

“It takes a lot more effort to do anything at home, because even before you get going, you have to put your legs on, and then it takes more effort to balance,” he said, as his wife, Pamela Relph, stood nearby.

“We live in a small apartment; we’re constantly banging into each other,” Relph said.

“I’m not the tidiest of people,” she said, laughing, “so he’s constantly tripping over stuff I’ve inconveniently put someplace because we just don’t have the room.”

On Thursday, the Purple Heart recipient and his wife received the keys to a brand-new, mortgage-free, barrier-free home as a gift from the Stephen Siller Tunnel to Towers Foundation, named after a fallen New York City firefighter who died on Sept. 11, 2001.

“Wide doorways, and the doors open automatically and close behind him; if he needs to be in a wheelchair, he can wheel himself into the shower,” said McClure. “The counter tops raise and lower so he can cook or clean.”

With cutouts under sinks in the bathroom and kitchen, Jones can wheel himself into a comfortable position: “Water begins with just a wave; it can motion detect.”

He and Relph will turn the more than 13-acre property into a fruit and vegetable farm.

“It’ll be on a small scale, but we’re going to be growing a wide range, including tomatoes, peppers, garlic, onions — everything you can thing of,” Relph said.

“Pam’s going to be doing the daily duties, and I am going to be there to help with the big projects,” Jones said, smiling at the still unspecified “honey do”-list he expects will follow.

In their apartment, Relph was fearful of the stone slabs in front of their building, which became slick whenever it rained.

“Whenever Rob went out there when it had been raining, it was like he was walking on thin ice,” she said.

Relph expressed her relief that she and her husband are moving into their forever home. “It might not seem like that big a thing, but it’s one tiny little stress that we’re never again going to have to think about,” she said.

Both discussed the final scene of “The Wizard of Oz.”

Jones agreed: “That line says to me comfort, happiness and family.”