Metro’s Silver Line extension is set to open in Loudoun County in 2020, and it'll pose a challenge to rescuers. They're getting a chance to practice on a simulator consisting of two old cars and some track.
Listen now to WTOP News WTOP.com | Alexa | Google Home | WTOP App | 103.5 FM

LEESBURG, Va. — One part of the area that’s awaiting Metro service wants to make sure its rescuers are ready once trains start running.

On Wednesday, leaders unveiled the Loudoun County Metrorail Training Simulator on the grounds of the fire and rescue training academy in Leesburg. The simulator features two retired Metro rail cars, tracks and a third rail.

Metro’s Silver Line extension is set to open in Loudoun County in 2020, posing a challenge to rescuers. “For us it is something new,” said County Battalion Chief Roger Martin. “It’s not your typical house fire; it’s not your typical running illnesses or EMS calls or even auto accidents.”

During a demonstration, a county rescue crew showed how it would establish communication with Metro’s command center and test to make sure the third rail is deactivated before moving onto the tracks to put out a fire. 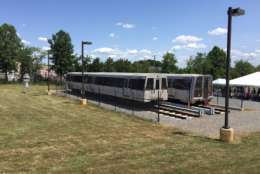 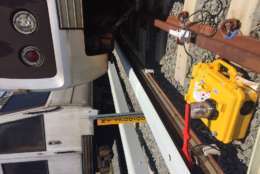 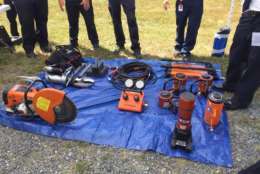 “We have our own police department … but we don’t have our own fire department,” said Metro Transit Police Chief Ronald Pavlik. “So we rely so much on the first responders to handle those medical emergencies and those fires and smoke incidents.”

Loudoun County board of supervisors Chair Phyllis Randall said, “If I’m a young mother, if I’m anybody, if I’m a parent and I want to get on Metro, I have to know that in the unlikely event something happens, that somebody will be there to take care of me and take care of my family when I’m probably the most scared I’ve even been in my whole life. And that’s what we’re doing here today.”

In addition to Loudoun County, responders from all over the region will use the simulator for everything from medical incidents to fires to mass casualty incidents. The only comparable training facility in the area is in Greenbelt, Maryland, leaders said.