Barred travelers arrive at Dulles: ‘America is for everybody’

Tareq and Ammar Aquel Mohammed Aziz, ages 21 and 19, natives of Yemen with green cards, were denied re-entry to the U.S. in the wake of President Trump's temporary travel ban. Nine days later, they and seven others arrived back at Dulles International Airport. "This morning a wrong has been made right; an injustice has been rectified," said one of the lawyers who helped them.
Listen now to WTOP News WTOP.com | Alexa | Google Home | WTOP App | 103.5 FM
(1/3) 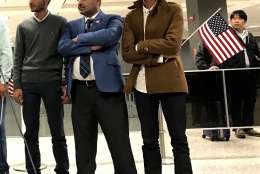 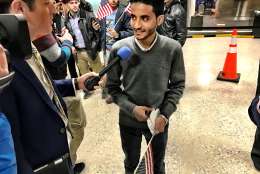 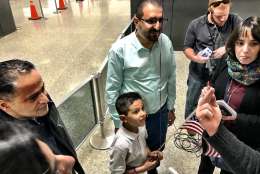 Tareq and Ammar Aquel Mohammed Aziz, 21 and 19 respectively, natives of Yemen who have green cards, were reunited with their father, Aquel, when they arrived on an Ethiopian Airlines flight from Addis Ababa.

In addition, the Al Murisi family, with three children from ages 3 to 14, arrived on the same flight.

The families had initially arrived at Dulles on Saturday, Jan. 28, but were denied entry and required to buy tickets back to Ethiopia, where their flights originated.

“Literally, while they were in the air, the executive order was signed,” said Paul Hughes, of the firm Mayer Brown, who in conjunction with the Legal Aid Justice Center represented travelers in Alexandria federal court.

“This morning a wrong has been made right; an injustice has been rectified,” said Simon Sandoval-Moshenburg, of the Legal Aid Justice Center, of Virginia, in a news conference at Dulles, shortly after the travelers arrived.

“We’re standing here with nine people who did absolutely nothing wrong, who had absolutely no reason to be barred from this country, other than the fact their passport said Yemen,” said Sandoval-Moshenburg.

Standing with his arms around his sons, Aquel Aziz said he was overwhelmed by the support.

“Thank you for every single person who tried to help me bring my kids back,” said Aziz. “I’m so happy; I’m so glad.”

“The State Department had taken the position that the visas … were revoked while they were literally in the air, flying to the United States,” said Hughes. “When they landed at Dulles last Saturday, their visas were marked with a large stamp that said ‘Cancelled.’”

In the interim, the Aziz and Al Masri families have spent several days in Ethiopia, then Djibouti.

Tareq Aziz said he felt bolstered by the outpouring of legal assistance. “They made me feel like we had a family,” he said. “That’s what I love about America.”

On Friday, in federal court in Alexandria, Va., Judge Leonie Brinkema allowed Virginia to join a suit against the Trump administration, which will continue.

Sunday, a decision by the U.S. Court of Appeals for the Ninth Circuit, in San Francisco, preserved a Washington judge’s order to temporarily halt the ban. Additional filings and rulings are expected Monday.

Regardless, Hughes said, he has reached an agreement with the government leading to Monday’s arrival at Dulles.

“What happened here, you can’t find it anywhere else in the world,” said Tareq Aziz.

His father echoed the appreciation, and opportunities afforded his family.