While most major road construction projects are built with the intention of speeding commutes for drivers in the DMV-area, Prince William county Del. Danica Roem says more attention — and money — should be spent on making those commuters safer, too.
Listen now to WTOP News WTOP.com | Alexa | Google Home | WTOP App | 103.5 FM

While most major road construction projects are built with the intention of speeding commutes for drivers in Virginia, Maryland and the District of Columbia, Prince William County Del. Danica Roem says more attention — and money — should be spent on making those commuters safer, too.

On Wednesday, U.S. Route 15 in Haymarket, Virginia, was blocked for several hours near Route 55 after a crash between a freight train and a vehicle. No injuries were reported.

Roem tells WTOP there is little chance that a long-discussed Route 15 overpass will ever be built, given current methods of determining which projects should receive funding.

“We have a safety issue,” said Roem. “We have a road that goes into railroad tracks in an area that has had a rapid and very large population growth.”

The railroad crossing was built before the housing boom in western Prince William County, including in Haymarket and Gainesville. At the time, few cars used the crossing daily.

Now, with its proximity to an exit from Route 66, which is undergoing expansion outside the Capital Beltway, far more vehicles use the crossing every day.

“As Haymarket has grown, its supporting infrastructure has not always kept up,” Roem said.

Some infrastructure projects have made a difference in life in and near Haymarket, Roem said, citing the widening of Route 15 to include a mixed-use path, as well as the expansion of the OmniRide bus service from Haymarket to five stops in Arlington, which Roem championed.

“We also still have some legacy problems that precede Haymarket’s very large growth in the past 20 years,” said Roem. “When you have a railroad coming through town, there’s the possibility of people being hit, or people sometimes making reckless decisions and trying to beat the arms coming down [or] trying to beat the train by going around it.”

Last year, 968 people lost their lives on Virginia roadways, said Roem. So far this year, the number sits at 808.

Roem acknowledged that, given current transportation funding priorities, it’s unlikely the Haymarket issue would ever get fixed.

“Prince William County has been seeking funding for years for a Route 15 overpass over the railroad tracks,” Roem said.

Roem is now seeking an additional way to get funding for projects that would make commutes safer, which often includes helping larger amounts of traffic to pass through.

Roem is working on legislation that would include a dedicated Transportation Safety Fund.

“It would take 10% of surplus funds that are not otherwise obligated — like a rainy-day fund, and other constitutionally obligated provisions — and actually put it toward these spot safety improvements.”

Although this year’s bill didn’t move much, Roem plans to “continue pushing this issue in January of next year, with some form of legislation that is entirely about preventing people from getting hurt and killed, or having major property damage on our roadways — and that includes when we’re dealing with trains, both freight lines and commuter rail.” 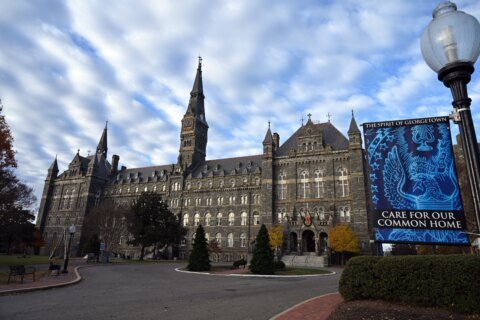