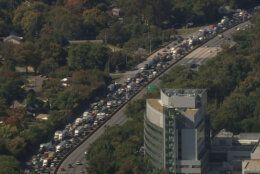 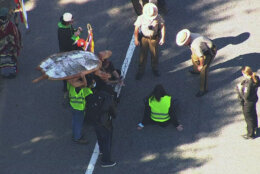 Some drivers were stalled on their commutes Monday morning when climate protesters blocked lanes of the Capital Beltway’s Inner Loop in Silver Spring, Maryland.

The demonstration began shortly before 10:30 a.m.

More than 10 protesters were sitting across the road and blocking all lanes of traffic, and several others were walking around, chanting and holding signs.

Police arrived around 11 a.m. and put some protesters in handcuffs or carried them off the road, as seen on a livestream from News2Share. After several verbal warnings, those who did not comply were arrested without incident and charged with obstructing the free passage of the public and failing to obey law enforcement officers, authorities said.

A spokesman for Maryland State Police said a total of seven protesters were arrested and taken to the Montgomery County Detention Center for processing.

Those arrested ranged in age from 32 to 74 and hailed from Vermont, Oregon and New York, as well as Maryland, according to state police.

The roadway reopened about an hour later at 11:20 a.m.

Maryland State Police, along with Montgomery County Police, advised drivers to seek alternate routes at that time and warned of delays.

In response to the protest, which led to a major backup on the Beltway in Silver Spring, Montgomery County Council President Gabe Albornoz had strong words for the protesters.

“We have to stress, while climate change is a critical issue facing all of us, these types of demonstrations are completely unacceptable, dangerous, and very disruptive to our community,” Albornoz said during a media briefing Monday. “So many things could have gone wrong and we just cannot stress enough how important it is to not proceed with these types of activities in our or any community.”

Drivers who called WTOP Traffic complained about the standstill traffic making them late to work, while other callers were concerned about the risk of getting in a wreck.

All lanes of the Beltway reopened shortly after 11 a.m., but protesters remained along the overpass with signs. The police presence has also dispersed.

Last week, another protest by climate activists briefly shut down the I-395 Southeast Freeway in D.C. 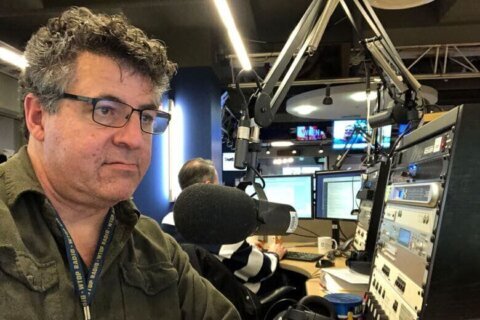