DC area could be moving closer to secondary water supply

"The (Potomac) river flow forecasts indicate that beginning in 2040, the demands may exceed the currently available water supply if the region would experience extreme conditions, similar to the worst droughts of record in 1930 and 1966."
Listen now to WTOP News WTOP.com | Alexa | Google Home | WTOP App | 103.5 FM

Regional leaders have given the green light to a study that will look into how a secondary water supply can be established.

Currently, many homes and businesses rely almost solely on the area’s biggest river as its main water supply.

WTOP’s Neal Augenstein goes in-depth on the issue on this episode of the DMV Download podcast:

Hedges also pointed out that while some other areas have the ability to tap into neighboring jurisdictions for water in an emergency, D.C. and Arlington County only have the Potomac River to keep taps running. Those two locations get water from the federally operated Washington Aqueduct, which is fed only by the river.

The go-ahead for the study, which would be done by the Army Corp of Engineers, was given by the Metropolitan Washington Council of Governments after its board heard from representatives with the area’s largest water companies.

“Not having an adequate quantity or quality of water for treatment and delivery to our customers would have consequences for all of the water utilities in the region,” said Tom Hilton, the planning division leader for WSSC Water.

Among the reasons a secondary source is needed, Hilton said, is the potential for an event, such as the 1993 rupture of the Colonial Pipeline, which led to significant amounts of oil going into the river.

“Unlike a drought that you can see coming weeks or months in advance, we have little if any warning on spill events,” Hilton said.

As for droughts, Hilton said that is something that needs to be planned for as climate change forecasts project wetter years and deeper droughts.

“The river flow forecasts indicate that beginning in 2040, the demands may exceed the currently available water supply if the region would experience extreme conditions, similar to the worst droughts of record in 1930 and 1966,” Hilton said.

In addition to asking the council’s board to approve a study, utility leaders also asked for the board’s help in building support for the project at the federal level, because federal funding will be needed to help pay the $800 million-or-more price tag for building a secondary water source.

“The cost of a new water supply will be enormous and something that the utilities will not be able to pass on to their customers alone,” Hilton said.

Charles Allen, a member of both the D.C. Council and the Council of Governments Board, supported the move to find a secondary source. He said more urgency is needed when it comes to this project.

“We all take for granted the fact that we can turn the tap on and just get great clean drinking water,” Allen said.

Hilton also asked the board to help educate and advocate for the project throughout the process. Penny Gross, a member of both the Council of Governments Board and the Fairfax County Board of Supervisors, said she agrees that it needs to be done.

The study on how a secondary water source could be established will cost $3 million.

In a DMV Download podcast, WTOP’s Neal Augenstein explains the logistics behind creating what could be a 17-billion gallon backup reserve. 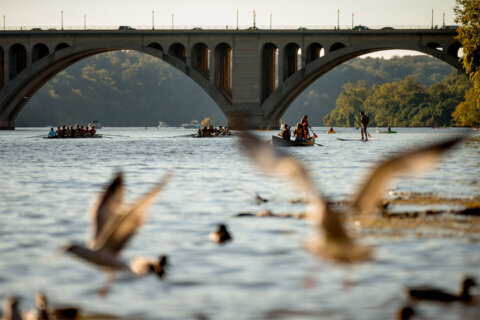