In 2020, relationships between police departments and many communities were at a low point. That prompted a one-time critic of police departments in his home state of Georgia to launch National Faith & Blue Weekend, a national effort to bridge trust gaps.

October will mark the third National Faith & Blue Weekend, and it’s something several national police organizations are urging local departments to participate in.

“Communities of color, like every other community, want to be policed with fairness and justice,” Georgia-based minister Rev. Markel Hutchins said at an announcement event Tuesday at the National Law Enforcement Museum, in D.C.

He’s marched in police demonstrations several times, but says Black and brown communities are not anti-law enforcement. “What we’ve been hearing too much from in the media and in social media is that vocal minority.”

Hutchins has rejected the notion of defunding the police, but he’s also implored law enforcement to engage with the community they serve, and see their critics for the human beings they are, and vice versa.

“We need a new direction; we need a new path,” said Hutchins. “The answers will not just be printed in the ink of a piece of legislation and in an executive order, and it cannot be taught in the academy. The answers lie in the hearts and minds of every resident in every local community and every law enforcement officer in this country.”

The leaders of some of the D.C. area’s biggest police departments were on hand, and will participate in the program.

“We know that mutual trust and respect between law enforcement and the public is a necessity; this trust makes cities safer,” said D.C. Police Chief Robert Contee. “Every encounter between an officer and the public is an opportunity to connect and establish a positive impression. This experience has a ripple effect when we do need to lean on community for their assistance.”

“I haven’t met a soul,” said Contee, “one person, that says ‘Hey, I want to be unsafe in my community.'”

He there are many ways to make the community feel included.

“It’s not just ‘Here’s what the police think we should do in order to build relationships,'” said Contee. “Sometimes for communities it’s a community walk; other communities, it may just be a Zoom meeting that might take care of whatever the need is. But we have to be flexible in that space.”

Prince George’s County Police Chief Malik Aziz said, “If you compare where things are now as opposed to two years ago, it’s working.”

“We have focused on the things that are not so common instead of the common ground that propels us forward,” said Aziz. “I think when you ask police officers what they want to see in a community, you’ll find the same answers [from the community] inside the police department — a better, safer community.”

Aziz said he has sat down with his department’s critics, which has made relationships “marginally better.” He argued that police chiefs have to be willing to sit and hear from critics.

“I’ve witnessed that good has come out of those meetings,” said Aziz. “I think we’re turning the corner, and things are changing. I have chosen to walk halfway and meet in a 50-50 partnership and I believe a lot of those individuals have also.”

He added that “meeting halfway has enabled us to understand one thing: that we want a better, safer, Prince George’s County.” 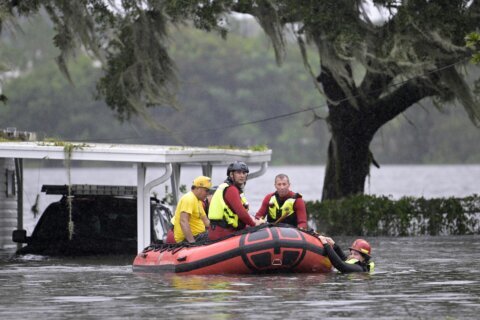