Virginia Route 9 is a rural two-lane road winding through western Loudoun County, past vineyards, farms and through the tiny town of Hillsboro. It also carries more 17,000 commuters a day from Maryland and West Virginia.

On Tuesday, the Loudoun County Board of Supervisors will hear the findings and recommendations from the Route 9 Safety and Operational Study, which aims to determine which improvements should be pursued to improve safety and traffic flow between the West Virginia line and Virginia Route 7.

The study contains short-, mid- and long-term improvements for the corridor.

Currently, Route 9 — also known as Charles Town Pike — is a two-lane road from the West Virginia border to Route 7, except for a short stretch near a roundabout at the westbound Route 7 ramps. Turn lanes exist at some, though not all, major intersections along Route 9.

The county has held virtual public meetings and offered surveys to gauge community priorities: The agenda item concludes most respondents want some action taken to improve conditions on Route 9, and while safety was most often selected as a priority by respondents, “rural character” was ranked as the top priority more often.

Last year, a multi-year project was completed to create roundabouts on either end of Hillsboro, which has improved traffic flow on Route 9, according to the Loudoun County staff study.

The county report included a review of planned and programmed projects along the corridor, and used the Loudoun County Travel Demand Model to project traffic volumes over future decades.

According to the model, limited growth in population and employment is forecast along Route 9, however travel to and from West Virginia is expected to grow. But anticipated expansion of Virginia Route 7 is expected to handle more of the increased traffic than Route 9.

While Route 15 north of Leesburg will be widened — in some cases going from two lanes to four — that’s not the case along Route 9, according to the staff item: “Based on the modest increase in volumes and the feasibility of two-lane solutions that improved operations and safety, the (widening of Route 9) alternative was eliminated from further consideration.”

In the long term, while traffic signals would improve traffic at several intersections in the corridor, according to the study, 64% of respondents preferred solutions involving roundabouts, which are both safer and more expensive. 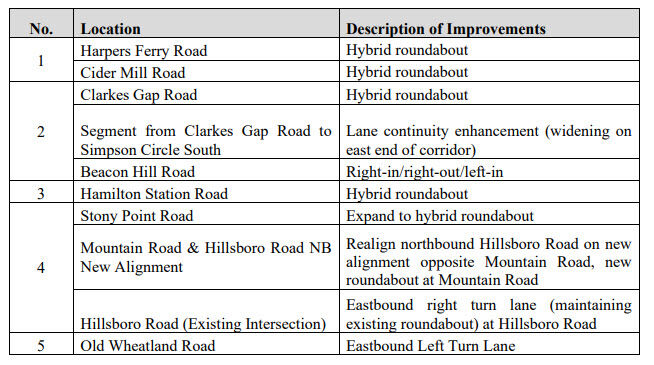 If the board decides to move forward with any projects, they would need to be programmed in a future capital budget. Cost estimates for all of the long-term projects totals $155,910,000.