Plunder your attic: Making the most of hand-me-down decor

America’s attics, basements and garages are filled with hand-me-down home decor and household goods waiting to be unearthed. And this may be the perfect moment for that to happen, with prices rising and supply chains at a crawl.
Listen now to WTOP News WTOP.com | Alexa | Google Home | WTOP App | 103.5 FM
(1/3) 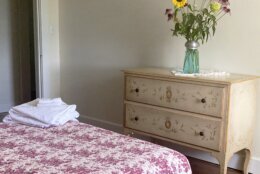 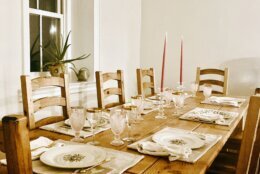 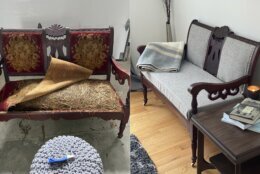 As we move through a world of disposable things, it’s easy to forget that previous generations kept nearly everything.

Furniture was made to last. Pieces of crystal or china were investments passed down from parent to child to grandchild. Even mundane items could remain in use for decades: The same Corningware bowl and General Electric mixer might churn out birthday cake batter for a generation and more.

Many of these items still exist, nestled under layers of yellowing newspaper in cardboard boxes or shrouded by dust-laden sheets. America’s attics, basements and garages are filled with hand-me-down home decor and household goods waiting to be unearthed.

And this may be the perfect moment for that to happen, with prices rising and supply chains at a crawl.

Using hand-me-downs is practical for anyone hoping to redecorate this spring. It’s good for the environment. It can even be mood-boosting if the items have sentimental value, or if you discover that your great-grandmother’s style was actually pretty fabulous.

“There’s joy in putting a piece together and knowing you’re restoring a piece of history,” says Shawn Hollenbach, a New York City comedian who recently rehabbed an antique settee that had been among his late mother’s prized possessions.

It was a challenging DIY project. The fabric was badly worn, and Hollenbach hadn’t reupholstered anything before. But he now proudly shows it to houseguests and tells the story of this cozy piece of furniture.

“It just gives you a sense of pride,” he says.

There can be stress too, though. Anything tied to family history can carry emotional baggage, and there’s the sometimes literal weight of heavy furnishings that no one in a family really wants.

Rather than store things for yet another year – or decade – interior designer Melissa Cooley of the Washington, D.C., firm Case Design is clear: Take those precious items out of their boxes. Dust off the furniture no one has used since the Eisenhower administration. Take a fresh look.

“You don’t do them honor by keeping them in the attic,” she says.

With that in mind, we’ve asked interior designers and homeowners how they’ve made the most of hand-me-down furnishings and household goods.

DON’T BE AFRAID TO USE THINGS, EVEN IF THEY’RE FRAGILE

Interior designer Nadia Subaran, co-founder of the Maryland-based firm Aidan Design, worked with a client who had a family collection of glassware and vintage plates made of green glass that no one was getting a chance to enjoy.

“When we were talking about the kitchen design, she said, ‘I really want to get these things out of boxes, out of the attic. Not just displayed but used,’” Subaran says. “So we did an entire sink wall with no wall cabinets, just open shelving, so that all of those things could be front and center.”

Today, that homeowner sees the items each time she enters her kitchen, and finds beauty in their striking green color.

Subaran encourages people to put treasures on display, as she did herself after inheriting a vintage sari from India, handmade of orange silk with shimmering gold thread. “I have very little occasion to wear saris,” she says, “but they’re beautiful.” Also: Her husband loves the color orange.

So rather than leave it in a box, “we literally hung it on a rod and then had a plexiglass cover made that doesn’t allow UV rays to come in and damage it,” she says. “I walk in my front door and it’s the first thing that I see.”

GET CREATIVE WITH LOCATIONS

Aileen Weintraub is a veteran of grappling with hand-me-down furnishings. Her recently published memoir, “Knocked Down,” details the months she spent on bedrest in a house filled with items her husband’s family owned for generations. There’s also a barn full of hand-me-downs from her own family.

“I was trapped in this old farmhouse with everybody else’s furniture,” she says. “Even the dishes were from the 1940s.”

As they debated what to keep, sell or give away, she persuaded her husband to try moving some items to new locations or use them in new ways.

A sofa was moved to better access the view out of a window. A marble-topped table didn’t look right anywhere but was too precious to give away, so they tried it outside on a covered porch. It hadn’t been designed as outdoor furniture, but, Weintraub says, “it’s become the most beautiful spot to sit and watch the sunset every evening.”

Hollenbach had the same experience with the settee he inherited, moving it from place to place and eventually settling on a spot in the guest room.

Cooley worked with a client who didn’t like a heavy, cherry-wood cabinet from her husband’s family, but needed to find a way to use it.

“She has a very luxe, modern style,” Cooley says, and this cabinet was the opposite of that.

In cases like that, the designer recommends isolating what you love about your favorite style and bringing some of that vibe to the furniture you’ve inherited. She had the cherry finish stripped from the cabinet and painted it a glossy black. Outdated hardware was swapped out for modern brass pieces.

“Find the elements you like, that you appreciate the most,” Cooley says, “then let’s start embellishing the product we want to enhance.”

Leaning into the contrast between old and new can produce beautiful results, Subaran says. If a traditional piece of furniture doesn’t fit in your modern living room, try putting it in a foyer where it stands out as something special.

“You can pair it with a more modern mirror or lamp,” she says, “to kind of help it connect with your other spaces.”

Cooley recalls a client who had a historic door that had been in the family for generations.

“They are African-American clients and this goes back to their ancestors,” she says. The small, beautiful hardwood door had “some history as to where it came from, what plantation it was on. It goes back that far.”

But the door had not been used in years and didn’t really fit anywhere in their home. Cooley’s solution: The new design for the couple’s bedroom would involve building a small linen closet.

“We were able to find hardware that looks aged, and we actually built their linen closet just so it can fit that door,” Cooley says. “It’s an ode to her family. And when she wakes up, she gets to see it every day.”