"I beg everyone who is watching to put yourself, for a few seconds, in my sad life," Ghaisar's father said. "I beg you to tell me, what would you do if you had lost the most caring, loving son?"
Listen now to WTOP News WTOP.com | Alexa | Google Home | WTOP App | 103.5 FM
(1/3) 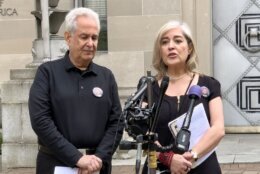 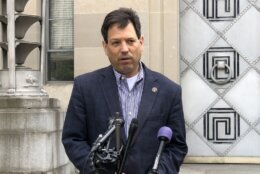 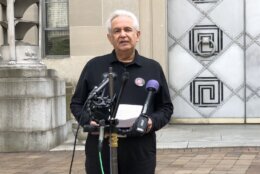 The parents of Bijan Ghaisar stood outside of the U.S. Department of Justice in downtown D.C. on Saturday, asking for help after the Virginia Attorney General ended prosecution against two officers accused of manslaughter for fatally shooting their son.

On Friday afternoon, the Virginia Attorney General’s Office filed motion with the 4th U.S. Circuit Court of Appeals to withdraw an appeal which sought criminal prosecution against officers Lucas Vinyard and Alejandro Amaya for shooting the unarmed Ghaisar in 2017.

Ghaisar was a 25-year-old accountant from McLean, Virginia, who was shot by the two officers on Nov. 17, 2017, in the Fort Hunt area of Fairfax County. The shooting followed a chase on the George Washington Parkway, during which the officers repeatedly tried to pull Ghaisar over without success.

In 2019, a video of the shooting was released by Fairfax County police, who had assisted with the chase.

“We are here today because we are outraged and we are disgusted,” said Bijan’s Mom Kelly Ghaisar. The Ghaisars said they are asking the Fourth Circuit Court of Appeals to reject the Virginia Attorney General’s request to dismiss the Commonwealth’s appeal.

They are also asking that U.S. Attorney General Merrick Garland “reopen the case based on findings in our civil case,” Kelly said.

Bijan’s father James broke down in tears describing his frustration with the Virginia attorney general’s announcement.

“I beg everyone who is watching to put yourself, for a few seconds, in my sad life,” James said. “I beg you to tell me, what would you do if you had lost the most caring, loving son?”

He said they are also asking Congress to pass a law to require U.S. Park Police officers to wear body cameras while on duty.

“Our intent has been to save other innocent lives,” James said.

Virginia State Sen. Scott Surovell spoke after the Ghaisar family on Saturday, expressing his disappointment in the decision to end prosecution.

“What happened yesterday was outrageous,” Surovell said. “I hope the Fourth Circuit Court of Appeals does not drop the case.”

He said that the U.S. Attorney General needs to be involved with this case.

“The federal government needs to change its mind and get involved in this situation,” he said.

Surovell said he lives about six houses away from where Bijan was shot by U.S. Park Police officers and was shocked when he heard what had happened.

“I came home from work that night and saw police lights at the end of the street. I thought maybe there had just been a collision,” Surovell said. “I can’t tell you how deeply this incident, this tragic, avoidable incident affected my community.”