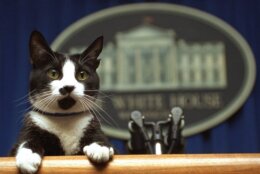 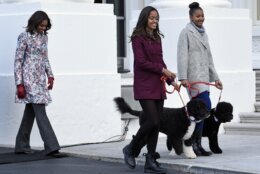 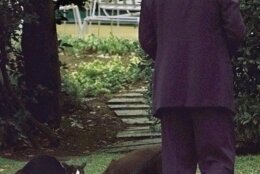 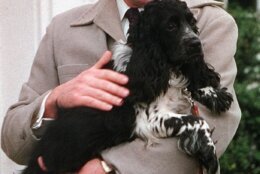 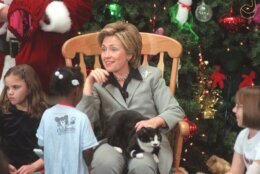 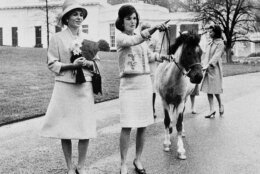 The 2-year-old Willow joins Commander, a recently acquired German shepherd puppy who follows two other German shepherds, Champ and Major. Champ died in June at age 13, while Major, a 3-year-old rescue, was sent off to a quieter life after behaving aggressively.

With Presidents James K. Polk and Donald Trump among the no-pets exceptions, animals have a long history in the White House.

Highlights of past presidential pets:

There have been a few ponies and many horses, including the very first pets to occupy the White House with President John Adams and first lady Abigail. They had horses named Cleopatra and Caesar, along with dogs Juno and Satan.

Caroline Kennedy, the daughter of John F. Kennedy, and her friends famously enjoyed riding her pony Macaroni on the South Lawn, along with another one named Tex, but Macaroni was usually stabled at the Kennedy family home in Virginia.

The White House once had stables of its own used by many presidents, the last being Theodore Roosevelt. The Rough Rider and ex-ranch owner loved horses. Sons Quentin and Kermit once smuggled their pony Algonquin onto the second floor of the White House in an elevator to visit a sick sibling, said Andrew Hager, a presidential pet historian from the unofficial online Presidential Pet Museum.

The White House stables were damaged in a fire in 1864, killing several horses and ponies of Abraham Lincoln and his children. One account has a distraught Lincoln trying in vain to save son Tad’s pet pony.

While dogs have been more frequent residents, there have been plenty of cat people in the White House: The Clintons, the Carters and the Fords to name a few.

It was the Bushes’ cat India, however, who sparked protests in 2004 among nationalists in Kerala, India’s southernmost state. They considered the name an insult.

“There’s a story that he would feed one of his cats from the plates in the White House dining room, then his wife objected and he said something like, ‘Well, if these plates were good enough for James Buchanan, they’re good enough for the cat,'” he said.

Caroline Kennedy briefly had a cat, Tom Kitten (aka Tom Terrific) but he made her allergy-prone dad sneeze and was sent off to live with a staffer. The media was invited to take photos of Tom Kitten upon his arrival in 1961. He lasted only a few weeks at the White House.

There have been oh so many dogs. The Obama’s Bo, a male Portuguese water dog, joined the family at the White House in April 2009. Sunny, a female of the same breed, came along in August 2013.

Among President John Tyler’s pets were a pair of “gentle giant” Irish wolfhounds. He gave them to his second wife, Julia, as a gift. Theodore Roosevelt, an avid animal lover, had a pack of dogs, snakes, guinea pigs and, by one account, a one-legged rooster.

Franklin Roosevelt had several pets but his favorite was a dog named Fala, named for a family ancestor. (Fala’s full name: Murray the Outlaw of Falahill.) He was often seen at the 32nd president’s side, until Roosevelt’s death in 1945. Given to the Roosevelts by a cousin, the Scottish terrier outlived him by seven years and was buried nearby.

Perhaps the most famous of dogs was Checkers, though he had his coming out before Richard Nixon became president. As Dwight Eisenhower’s vice presidential running mate in 1952, Nixon vowed to keep the cocker spaniel given to his family by a Texas supporter amid allegations he misused campaign contributions.

Word has it that Andrew Johnson had no official pets but left a basket of flour and some water for the resident White House mice every night and refused to have them exterminated.

“So I like to consider them pets but, you know, that’s kind of an open question,” Hager said.

William H. Taft had two prize cows: Mooly Wooly and Pauline. They grazed on the White House lawn and provided the home’s milk and butter.

Theodore Roosevelt was gifted a badger by a girl in Kansas during a train stop.

“He was really excited, but it bit him so he wasn’t happy about that,” Hager said.

And Benjamin Harrison once received two opossums from supporters in Maryland, naming them Mr. Reciprocity and Mr. Protection in homage to two of his party’s political platforms.

Woodrow Wilson, according to Hager, had a not-so-nice Shropshire ram named Old Ike. According to a newspaper account in 1920, the purebred ram was “forceful and strategic,” often charging White House staff and police. Wilson, the 28th president, eventually banished Old Ike from the White House to Maryland.

Old Ike had a habit of chewing tobacco. Cigars, to be exact. He’d feast on discarded cigar butts. According to the ram’s obituary in the Spartanburg (S.C.) Herald in 1927, Old Ike’s caretaker gave him one final chew in his old age, and “he dropped off peacefully munching it.”

The ram led a herd of sheep that kept the grounds trimmed up in a show by Wilson to tighten his belt and free the White House gardeners to join the first world war effort. Although many other presidents had farm animals, Wilson auctioned off the flock’s fleece in 1919. Combined, the auction earned $58,823 for the Red Cross, a huge sum at the time.

“Thankfully, we don’t have to pay that much for a sweater,” Hager said.