The Air Florida crash killed 78 people, including four who were in their cars on the inbound 14th Street Bridge. Seventy of 74 passengers and four of five crew members died. The flight had taken off from what was then know simply as National Airport.

And, within a half-hour of the plane plunging into the frozen Potomac River, a Metro Orange Line train derailed in a tunnel, between the Federal Triangle and Smithsonian stations. The derailment killed three people and inured 25.

Forty years later, one of the people involved in WTOP’s coverage that day reflects on how the technology of news gathering has changed.

Dave Statter wasn’t a WTOP reporter at the time.

“I had an appointment set up for Jan. 15, that Friday, to be a backup traffic radio reporter at WTOP Radio,” he said this week.

Shortly after 4 p.m., while watching the snowstorm out of his Pentagon City apartment, Statter heard scanner traffic between emergency agencies that a plane had crashed into cars and trucks on the bridge, and ended up in the Potomac.

Statter made his way through the Pentagon City streets, trying to confirm the information, and provide it to WTOP.

“There were no cellphones in those days, I had to find a way to communicate,” recalled Statter.

He stopped at the Twin Bridges Marriott, located near the 14th Street Bridge.

“I talked my way into a fifth-floor hotel room, where people were watching the crash scene [out the window] and they let me use the telephone,” said Statter. “So, I called WTOP with their first reports, using somebody’s hotel phone, a landline phone.”

While WTOP reporters at the time had two-way radios, “I wasn’t on staff yet, so I didn’t have one. That hotel phone was my lifeline to the WTOP newsroom.”

In one instance, Statter’s line was disconnected, but his hosts in the hotel room allowed him to dial the newsroom again.

“When I called back in, someone said ‘Are you calling about the Metro crash?’ and I said, “What Metro crash?'” said Statter, reflecting the limited focus a reporter often experiences, when immersed on-scene, covering a story.

Statter went on to a long broadcast news career, at WTOP and WUSA-TV. His Statter911 blog contains archive materials from the busy day in his career.

Over the decades, technology has continued to improve, providing reporters with digital ways of recording and transmitting reports on smartphones.

“Here in 2022, if that crash were to have occurred today, the first word to the WTOP newsroom or Traffic Center would certainly come from someone on that bridge, and most likely they’d be sending photos or video,” Statter said.

However, given the prevalence of people documenting their lives and experiences, at times becoming viral videos, Statter said that leaves him with a question: “Would people be so focused on getting those images, and so detached, that we wouldn’t have a Lenny Skutnik or Roger Olian, jumping in the river, trying to save those passengers?”

Skutnik, a retired U.S. government employment, dove into the icy water, saving the life of Priscilla Tirado. Roger Olian, a sheet-metal foreman, was the first to jump into the water to try to reach survivors.

The National Transportation Safety Board found the failure to properly de-ice the plane, and the pilots’ inexperience in winter weather operations contributed to the crash.

The crash led to reforms in pilot-training regulations.

Archival photos of the crash of Air Florida Flight 90 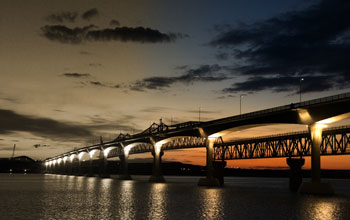