What to expect with the new security checkpoints at Reagan National

Travelers flying to Reagan National Airport will be welcomed by new checkpoint buildings at terminals B and C. Here's what you need to know.
Listen now to WTOP News WTOP.com | Alexa | Google Home | WTOP App | 103.5 FM
(1/4) 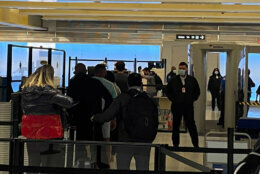 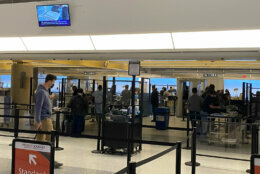 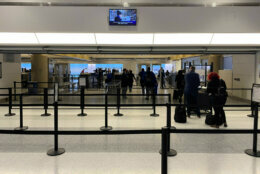 Travelers flying to Reagan National Airport will be welcomed by new checkpoint buildings at Terminals B and C. Here’s what you need to know.

Starting Tuesday, the typical flow that you have been used to at both terminals will be different.

“Basically, what’s going to happen is that these new security checkpoints will make you zigzag through the airport until you get to that main hall, which will now be behind security,” NBC Washington transportation reporter Adam Tuss told WTOP.

The big concourse, known as National Hall, will only be accessible post-security, but the change will allow passengers to move freely between gates 10 and 59.

Reagan National was running out of space before the pandemic, Tuss said, and the idea is to give more space post-security.

“They were handling millions more passengers than they really could handle, than the airport was designed to handle. And so they needed to find a way to create more space. And what they did is they’ve given these new security checkpoints, their own area that, literally created out of thin air between the Metro station and the existing terminals,” Tuss said.

The improvement project was dubbed Project Journey, and it was scheduled to open just in time for the November-December holiday travel, which is expected to approach pre-pandemic levels.

How do you navigate this change?

If you’re dropped off at the top level, you will still walk in to get your boarding pass and drop off your bags there. Then, you’ll go down a set of new escalators to the new security checkpoints. Tuss said. After going though security, you’ll be able to “kind of move about the entire airport.”

If you’re taking the Metro, you will be able to connect directly from the station or the parking garage without going upstairs to the top level, as long as you don’t have any bags to drop off. But if you do, you’ll need to go up to bag check and then come back down.

“That will be the difference there, where you will have to kind of go back up and then come back down. So it’s gonna be a big change,” Tuss said.

Tuss said the Transportation Security Administration and Reagan National would like to keep the process of going through security under 20 minutes, and with opening up more lanes, there will be more TSA lanes at the security checkpoint area.

A little-known fact, according to Tuss: TSA actually shuts down in the middle of the night, say between midnight and 4 a.m.

“That’s why if you ever had like a 6 a.m. flight, there was always that long queue of people just waiting for the lines to open the checkpoint lines to open and then you could go through. Well now, because of this new security checkpoint space that is solely designated for TSA, they’ll be able to work around the clock, so you really shouldn’t be having that queuing that you’ve seen before, and they should be able to get you through these next couple of days,” Tuss said.

The checkpoint buildings replaces the three existing checkpoints for terminals B and C, with the number of security lanes going from 20 to as many as 28.

Project Journey also included the creation of a concourse that replaced the infamous Gate 35X. That new concourse opened in April.