DC-area residents show up to honor veterans despite dreary weather

Despite the rainy weather, people showed up at memorial sites around the D.C. area to honor veterans this holiday.

At the World War II Memorial site, a parade set to honor Sidney Walton — a veteran of WWII — began with a band playing iconic American tunes such as “God Bless America” and “The Star-Spangled Banner.”

Claudia Morcelo attended the gathering to honor her uncle who served in the Navy and fought in the Vietnam War. She said she tries to go to the memorials every Veterans Day because of him.

“In his memory, I like to come and engage with others who have also been in the warsm because it brings a lot of memories to me,” Morcelo said.

“I got mobilized to serve in Iraq during Operation Enduring Freedom, but I was in school at the time so after serving about nine months I was released to go back to school,” Annor said.

He said it was his first time visiting the memorials on Veterans Day.

Capitol Hill resident Liz Costanzo said she was running a 5K for the Wounded Warrior Project, something she does every Veterans Day. She placed a flag at the Vietnam Veterans Memorial afterward to pay her respects.

“I’m carrying the flag for wounded warriors in honor of our veterans,” Costanzo said. 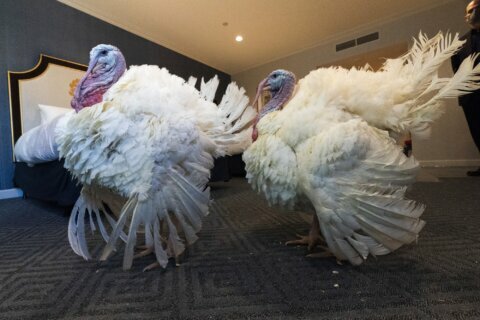