Members of a Northwest D.C. community are reviving an effort to remove from a fountain the name of a village founder who supported segregation.
Listen now to WTOP News WTOP.com | Alexa | Google Home | WTOP App | 103.5 FM
(1/3) 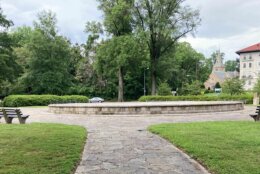 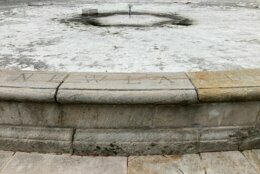 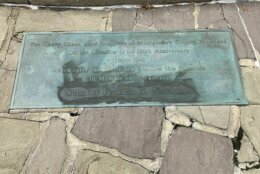 Members of a Northwest D.C. community are reviving an effort to remove from a fountain the name of a village founder who supported segregation.

The Chevy Chase Circle Fountain has the name of Francis Newlands etched in stone along with a plaque.

Newlands, who was a former U.S. Senator representing Nevada, ran the Chevy Chase Land Co. during the 1890s and developed Chevy Chase with the intention of making it an entirely white area.

The structure, also known as the Francis Griffith Newlands Memorial Fountain, reveals the words “NEWLANDS MEMORIAL FOUNTAIN” chiseled into the stone in his honor.

Chevy Chase eventually became a village on the Maryland side and a D.C. neighborhood on the other side of the border.

The D.C. Advisory Neighborhood Commission panel covering that area voted unanimously this week during a virtual meeting to take out the plaque and scrub out Newlands’ name altogether.

The panel has no official authority to do so but the resolution is requesting the National Park Service, which maintains the area of Chevy Chase Circle, to get the job done.

Advisory Neighborhood Commission 3G panel member Chanda Garfield, the panel’s only African American member, proposed the resolution pointing out that she wouldn’t have had a chance to move to the District if past racist beliefs were still prevalent today.

“Fortunately now, our community in the words of John Lewis, ‘We know better,’ so we must fight for change and we must do better,” Garfield said.

It’s not the first time citizens have tried to make changes to what’s locally known as the Chevy Chase Circle Fountain. In 2014, members of the ANC that represented the area called on the D.C. Historic Preservation Office to remove Newlands’ name, Bethesda Beat reported.

Since the death of George Floyd in Minneapolis police custody and subsequent protests demanding racial justice and police reform, there has been a push to take down monuments and symbols that memorialized the U.S.’ racist past.