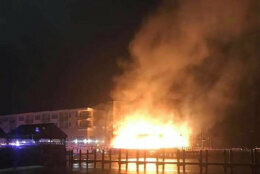 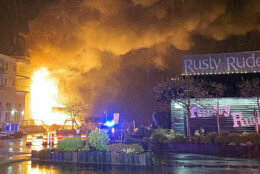 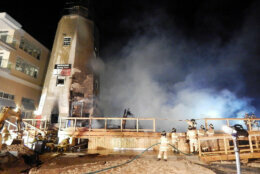 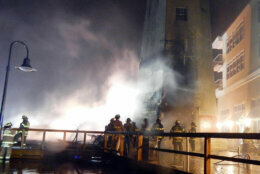 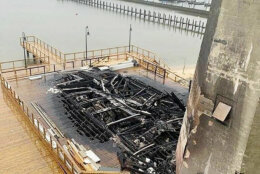 A soon-to-open restaurant behind Dewey Beach’s landmark beachfront lighthouse was gutted by a fire Thursday night.

Firefighters responded to the blaze at the Lighthouse Restaurant around 10 p.m. Thursday, Kent Swarts, a captain with the Rehoboth Beach Fire Department, told WTOP.

By the time firefighters arrived, the flames had fully engulfed the restaurant, including new decking that had been installed.

Construction on the two-story restaurant at 124 Dickinson Ave. had recently completed, and it was set to open this summer as part of the Lighthouse Cove resort project that includes a nearby Hyatt Place.

The fire spread rapidly, in part, because of the all-wood structure and breezy conditions, Swarts said. “It had collapsed and burned through the deck boards before we were halfway through putting water on it … We were able to just contain it,” he added.

Because the lighthouse structure itself is mostly concrete, it ultimately didn’t suffer much damage from the flames, Swarts said.

“We believe that the lighthouse is in pretty good shape,” Swarts said.

There were no injuries reported.

In a statement, the Lighthouse Cove Development Company said the company is “devastated” by the fire. “Thankfully, the majority of the damage was confined to the restaurant, and the remainder of the redevelopment, including the Hyatt Place Hotel, Residences at Lighthouse Cove, and Lighthouse Cove Event Center, remain intact,” the statement said.

Firefighters from the Bethany Beach Fire Department, the Lewes Fire Company and the Indian River Fire Company also responded to the fire.

There’s no word yet on a cause. The Delaware State Fire Marshal is investigating the fire.