"I never really had a role model that showed me what a scientist looks like, that looks like me," said Lataisia Jones, a researcher at Children's National Hospital.
Listen now to WTOP News WTOP.com | Alexa | Google Home | WTOP App | 103.5 FM
(1/4) 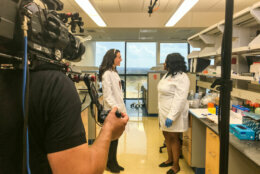 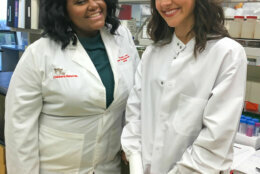 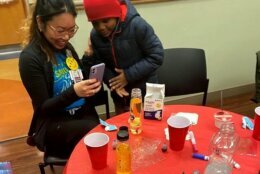 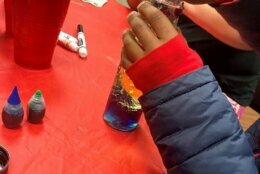 A national TV series will showcase a D.C.-area researcher in a program about women on the cutting edge of science. It features everyone from astronauts to zoologists, engineers to codebreakers.

“I never really had a role model that showed me what a scientist looks like, that looks like me,” said Lataisia C. Jones, a researcher at Children’s National Hospital.

Jones, 31, was the first African-American student at Florida State University to graduate with a Ph.D. in biomedical sciences. She’s a postdoctoral fellow in the Center for Neuroscience Research at Children’s National and studies child brain development “to understand certain diseases and how they manifest by understanding DNA and proteins involved,” she said.

Her first research project at the College of William and Mary helped her realize she belonged in laboratories, Jones said. Now, she is dedicated to becoming a role model to promote careers in STEM fields.

“The overall goal is to not only influence but to show young girls that, ‘You can be in these positions, too,'” Jones said.

Jones lives in Maryland. She attended Virginia State University for her bachelor’s and master’s degrees. She is also an IF/THEN ambassador with the American Association for the Advancement of Science.

“It teaches so many things. You’re showing how water and oil do not mix,” Jones said. And it’s relatable, “because the main ingredients are oil, water, food coloring and Alka-Seltzer.”

Jones studies previous research and conducts her own experiments, working toward a better understanding for how brain development abnormalities influence autism spectrum disorders.

“I’m constantly at my bench in the laboratory, doing experiments on a daily basis, and then finding data and using the microscope to analyze my data, counting things and doing statistics to run and see the significance of certain phenomena,” Jones said.

One such phenomenon involves the use of a green fluorescent protein (GFP) that’s connected to particular DNA Jones might be studying. When it’s injected into the brain of an experimental model, the changes displayed look like green lightning flashing.

“The GFP allows me to see a lot of different things going on in the brain, because it sticks out more than anything else because of that green color,” Jones said. “It allows you to focus on particular things that you can’t focus on by the naked eye.”

Some of those activities will be highlighted when Jones is featured on the CBS program “Mission Unstoppable,” which airs 11 a.m. Saturday. Watch a promo video of Jones’ episode.