Motorcyclists participate in the 30th anniversary of the Rolling Thunder 'Ride for Freedom' demonstration in Washington, Sunday, May 28, 2017. Rolling Thunder seeks to bring full accountability for all U.S. prisoners of war and missing in action (POW/MIA) soldiers. (AP Photo/Cliff Owen)

The annual event that brought thousands of veterans and motorcyclists to the D.C. area over Memorial Day weekend for 32 years will continue.

American Veterans, better known as AMVETS, has announced it will pick up where Rolling Thunder left off.

Miles Migliara, national communications manager for AMVETS, said the event is designed to raise awareness of the 82,000 service members still unaccounted for, dating back to World War II.

The 2020 event, under the name Rolling to Remember, will include an expanded mission. It will also address what Migliara called a “suicide epidemic” among veterans.

“This needs to be a national conversation,” said Migliara, who explained that more than 20 veterans take their lives each day.

AMVETS announced that the events will begin May 22, 2020, and continue to Memorial Day.

Migliara added that traditions, such as the “Blessing of the Bikes” at the Washington National Cathedral, will continue, as will the motorcycle ride on Memorial Day Monday.

AMVETS is working on details with the National Park Service and the Pentagon police, including working out a proposal to have parking at the Pentagon’s parking lots.

“We want to make sure everyone feels included,” said Migilara, but he added, while there will be some entertainment on the steps of the Lincoln Memorial on the first day of the weekend, “It’s not a party. It’s not just a rally. This is a serious demonstration.”

AMVETS also announced that they are crowdsourcing the inaugural patch design.

The winning design for the event will be announced on Veterans Day 2019. Submissions can be made to ride@amvets.org. Guidelines for the logo can be found online. 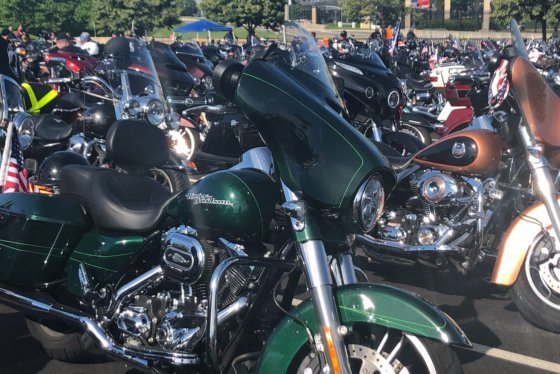