Unit-based pricing charges residents a set amount of money for each trash bag set out at the curb. Simply put: The more trash you throw away, the more you pay. And it's making a big difference in communities nationwide.
Listen now to WTOP News WTOP.com | Alexa | Google Home | WTOP App | 103.5 FM

How much trash do we throw away? How does recycling work? What, even, is compost? TRASHED is a three-part series that looks at the state of waste in the D.C. region and the options local experts are exploring to cut down on the amount of trash that’s piling up.

The small town of New Windsor, Maryland, is making a big difference when it comes to trash.

How did they do it? Residents started paying for each bag of trash they threw in the bin.

The radical results were a surprise to Town Manager Gary Dye, but not to waste reduction strategist Kristen Brown, who helped implement New Windsor’s pilot program.

“It always works,” said Brown, a national expert on waste diversion — a term that describes strategies used to reduce waste going to the landfill or incinerator by recycling or other means.

“Every time a community moves this forward, they reduce their waste between 40 and 50 percent and it’s very, very, very fun to see.”

Tying your waste to your wallet

New Windsor’s 34-week program, which ends in June, is called unit-based pricing, and it isn’t a new concept. Brown came across it around 30 years ago, while working in Europe. In the U.S., Worcester, Massachusetts, put it in place in the 1990s, and once they did, Brown said, residents dropped their trash rate by about 50% — “and it stayed down.”

Unit-based pricing (often called “pay-as-you-throw” or “save-as-you-throw”) charges residents a set amount of money for each trash bag set out at the curb. The more trash you throw away, the more you pay.

At first mention, the concept doesn’t always go over well with residents. But Brown said it’s important to remember that trash collection isn’t free in the first place; it’s often paid for by taxes or through a homeowners association. And unit-based pricing can actually save residents and jurisdictions money while cutting down on waste, since under the standard system “you’re not incentivized to throw away less.”

Brown estimates about 2,000 municipalities in the U.S. use a unit-based pricing model, and it’s something leaders in the D.C. area are considering. There is a recommendation for the program in Montgomery County, Maryland, and D.C. is slated to start a fully funded pilot.

Chris Weiss, executive director of the DC Environmental Network, helped to push for the District’s program. He said pay-as-you-throw forces participants to pay attention to what goes where and “enhances composting programs and food waste programs.”

“It’s the base that you have to put in place to support a real zero-waste program,” Weiss said.

D.C.’s Department of Public Works currently collects about 99,000 tons of trash from the District’s 105,000 single-family homes and small residential buildings each year; private haulers are responsible for collecting garbage from larger multi-unit buildings and businesses, which are aplenty in the city.

Along with trash reduction, most unit-based pricing programs also see an uptick in recycling. New Windsor’s recycling rates nearly doubled, from 21% to 38%, experts working on the project report. Recycling in Natick, Massachusetts, increased by 20% after it implemented a pay-as-you-throw program, according to Brown’s research.

“I think what happens in a unit-based pricing program is, it’s the first real time that everyone reads the directions,” Brown said — especially when it comes to what can be recycled and what should be thrown away.

Those who participate in pay-as-you-throw are more likely to donate clothes and furniture, and to take electronics, hazardous waste and larger household items to proper drop-off locations instead of throwing it all in the trash.

“I think most people say to themselves, ‘I’ll do that next week; I’ll think about that next week.’ … But when you have that little price signal, you do it this week. And then you change your behavior because it’s really simple,” Brown said.

There are some hurdles to implementing a pay-as-you-throw program, however — getting residents on board with change is a big one. Dye, New Windsor’s town manager, said locals were “skeptical and hesitant” at first to the proposed pilot. He advises other municipalities to “plan for resistance” when introducing the program.

“I think it’s more of a perception that this costs more money to do. In reality, it costs less money to do, because an overall community, if they reduce their trash by 45%, that means their cost of disposal is down by 45%,” said Brown, who added that many cities and towns funnel the savings into public programs such as fixing potholes or improving parks.

The Institute for Local Self-Reliance reports New Windsor will see an estimated $30,000 a year in savings from reduced disposal fees.

“It’s different, but it’s worth it because it always works,” Brown said.

Changing the way we consume

“You don’t want to bring into your house something that you’re going to have to pay to get rid of. And therefore, people change their purchasing habits,” said Neil Seldman, co-founder of the Institute for Local Self-Reliance.

“Just these tiny actions and decisions that we make every day at the store, in the kitchen, to be a little bit more sustainable, when really taken on a metro scale or a national or global scale is really powerful,” said Adam Ortiz, director of Montgomery County’s Department of Environmental Protection.

In recent years, many cities and counties nationwide have also implemented taxes and bans to discourage single-use disposable items, such as plastic straws and plastic bags.

Cathy Plume, of the D.C. chapter of the Sierra Club, recalled the institution of D.C.’s plastic bag tax: “Overnight, you saw behavior change for a nickel — at the price of a nickel. All of a sudden, everyone was carrying their own bags and reusable bags here in D.C., and that movement really created an opportunity and a learning moment that other things could happen too,” she said.

Maryland just passed a statewide ban on foam cups and containers, and Ortiz said he is looking at what can be done about other plastics that are not recyclable, particularly No. 6 plastics — the recycling code you see on the bottom of the product — “which are basically your fraternity-style red Solo cup.”

“It’s important to recycle, no question about it, but there’s just too much disposable material in our waste stream. And some of it gets captured in recycling, but too much of it ends up on the side of the road and in our local streams. So we are looking at more ways to curb products that are unhealthy in the environment,” he said.

Policies such as these don’t just help to keep non-recyclable elements out of local waste streams and waterways; they also put pressure on companies to use more environmentally friendly materials when manufacturing and marketing their products.

A new shopping platform announced at the 2019 World Economic Forum, called Loop, would do away with disposable containers for everyday items such as shampoo and laundry detergent, which often come in large plastic bottles, and replace them with reusable containers, The Associated Press reports. Seldman, from the Institute for Local Self-Reliance, said such changes that favor reusable materials over single-use disposables are critical to making progress in waste diversion.

“We cannot recycle our way out of the plastic dilemma. … Once you have a piece of plastic, it is not going anywhere for 1,000 years,” he said.

Major companies such as Starbucks and Hilton have also made moves to cut down on single-use plastic, and emerging businesses are finding innovative ways to reuse trashed materials in new products. The shoe company Rothy’s, for example, makes women’s flats and loafers out of plastic bottles.

“We see this as the trend: that the big corporations are getting it, that they have to be responsible,” Seldman said. “And the entrepreneurial spirit is alive, and if something is banned, someone is ready to jump in and provide an alternative, which is a terrific thing.”

However, Ortiz said, innovative and entrepreneurial spirit is needed across the board.

“Corporations and manufacturers are a part of that. We need their help and we need them also to up their game and find ways to make more materials that are recyclable, are compostable and aren’t a burden on our environment.”

Working toward the future

The nation’s capital and nearly every county in the D.C. area is working toward a “zero-waste” goal. A lot needs to happen to get there, but experts say it really isn’t out of reach.

“It’s hard to imagine that we’re going to be more wasteful in time, and that’s certainly the reaction that we’re getting from people, is they want less waste; they want to compost — we can’t keep up with the demand,” Ortiz said.

“Our recycling centers are overwhelmed; we all have to expand. So that’s what people are expecting, and I think that’s what we’ll see in the future.”

Plume said D.C.’s waste-diversion rate, one of the worst in the region, won’t stay that way. And with recent changes in policy, plus pilots in the works, she expects to see that diversion rate improve sooner, rather than later.

“When things look all doom and gloom, what’s happening in D.C. is actually quite positive,” Plume said.

“The District is really quite progressive when it comes to what we’re looking to do for waste. There’s a lot of work to be done, but there’s a lot of good will and a lot of dedication to making things better.” 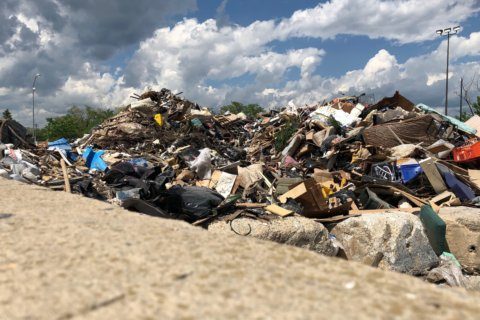 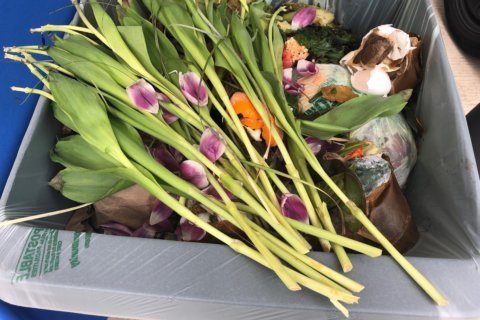