March 12 was named “Vernon Davis Day” in the nation’s capital by a proclamation by Mayor Muriel Bowser and an official resolution from D.C. Council.

The celebration was held at Truesdell Education Campus in Northwest, where Davis attended elementary school.

“I grew up not too far from here. I vividly remember coming to this school,” he told a crowd of students and dignitaries.

“I used to have dreams of being a professional athlete. But I knew that the only way to get there is by paying attention, doing my very best on the field, and doing well in class. My grandmother didn’t tolerate anything less than that,” Davis said.

Davis played football at Dunbar High School and the University of Maryland before being drafted sixth overall by the San Francisco 49ers in 2006. Davis, a 2-time Pro Bowler, played for the Super Bowl 50 champion Denver Broncos before coming home to join the Redskins in 2016. 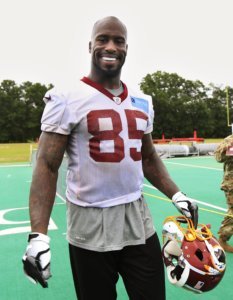 “What I’ve found is that giving back, empowering, inspiring our young people as well as adults to be the best they can possibly be is more than anything in life. That’s something I wake up for … every day that I walk out of the house, I try to find a way that I can make a difference in this world,” Davis said.

In 2012, he founded the Vernon Davis Foundation for the Arts. He also works with the Boys and Girls Clubs of Greater Washington, and is involved with several other projects.

“His story is stitched into the fabric of this community,” Ward 4 D.C. Councilmember Brandon Todd told the crowd. “Vernon Davis shows us all that with hard work and focus, you can achieve anything, especially when it’s sprinkled with a little bit of Ward 4 magic on top.”

“Thank you for coming back and remembering your neighborhood, remembering D.C., and excelling in all that you do, and being a true representation of our city,” said Mayor Bowser.