Rain will continue to pour down onto the region until Sunday evening. A flood warning is in effect for parts of Virginia until 10:30 p.m. and most of the region is under a flood watch until Sunday morning. Area roads have flooded and drivers should take caution. Here's what you need to know.
Listen now to WTOP News WTOP.com | Alexa | Google Home | WTOP App | 103.5 FM
(1/8) 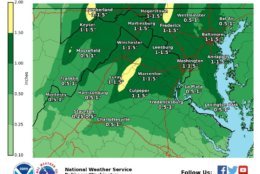 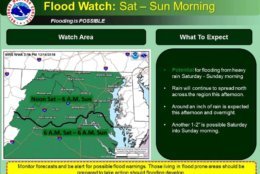 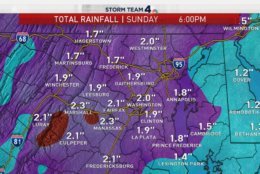 WASHINGTON — The D.C. area broke a century-old rainfall record this weekend, and the rain keeps coming with flood watches and warnings in effect for the entire WTOP listening area.

Saturday has been steady with rainfall, and while it’s a refreshing break from the longest rain-free stretch of the year, the rain isn’t expected to stop until Sunday evening.

“Rain will continue to fall [Saturday] and through your Sunday with another 1 to 2 inches possible of rain accumulation before it is all said and done by Sunday night,” said Storm Team 4 meteorologist Lauryn Ricketts said. “Rain will continue overnight turning to more showery activity tomorrow.”

The National Weather Service has issued a flood warning for Loudoun, Fairfax, Fauquier and Prince William counties in Virginia until 7:30 a.m., as 1 to 1.5 inches of rain is forecast.

A flood warning has been issued until 1:30 a.m. for D.C., Montgomery County, areas of Prince George’s County and Arlington County.

A Flood Watch is also in effect for most of the WTOP listening area from Saturday afternoon until early Sunday at 6 a.m.

Moderate flooding is forecast in the following rivers.

“The key take-away is that the weekend will be pretty soggy for Christmas and holiday shopping so plan for wet roads and ‘pack your patience’,” Storm Team 4 meteorologist Steve Prinzivalli said.

WTOP’s Traffic Center is reporting multiple flooded roads in the area. WTOP’s Dave Dildine says that a lot of spinouts have occurred on highways and a lot of roads have gone underwater “You’ll want to take it slow with your headlights on.”

About three water rescues have been reported across Fairfax County.

Fairfax County Fire and Rescue personnel responded to a person trapped in a vehicle stuck in water at Woodburn Road and Robey Avenue. They also responded to two other water rescues: One at Fairfax Station Road at Moonpatterns Trail and another at Old Courthouse Road and Besley Road.

What’s in store for Sunday

Sunday will be still be unsettled as the upper-atmospheric low pressure center will pass overhead, producing additional light showers with a few, wet snowflakes possible in the mountains but nothing significant. There will be some dry stretches, too, but it will be pretty damp day.

Until Friday, it was the longest rain-free stretch of the year for the area.

While temperatures in the area have been below average for much of December, the trade-off was that most parts of the area were dry for 11 days. That’s the longest precipitation-free stretch since a 21-day dry stretch in 2017 from late September into early October.

A flood watch is in effect for the area Saturday into early Sunday, which could cause flooding of small streams, creeks and urban areas.

It will turn rather breezy late Monday, as a cold front approaches the area, Prinzivalli said. In the wake of the front, blustery northerly winds will bring cooler air back into the area with highs in the middle 40s — seasonable for the middle of December — under a partly sunny sky.

Wednesday should be dry but a fresh storm may bring a batch of showers late Thursday into Friday.