After torrents of rain throughout the region Tuesday evening, flooding conditions have closed multiple roads in the D.C. area and even a school in D.C. Wednesday morning. The good news? The threat of heavy rain and flooding will soon be over.
Listen now to WTOP News WTOP.com | Alexa | Google Home | WTOP App | 103.5 FM

WASHINGTON — After torrents of rain spread throughout the region Tuesday evening, flooding conditions have closed multiple roads in the D.C. area and even a school in D.C.

The threat of heavy rain is expected to die down throughout the day, according to Storm Team 4 meteorologist Chuck Bell, but much of the soggy situation still posed problems for morning commuters.

In Maryland, a flood warning is in effect for Prince George’s County until 1 p.m. The National Weather Service said the Water Street bridge in Upper Marlboro will be flooded; the river has crested and waters will slowly recede.

In D.C., Eliot-Hine Middle School in Northeast is closed Wednesday due to flooding in multiple areas of the building. Students can still get a hot meal at nearby Eastern High School at 10 45 a.m.

Special Notice…EHMS will be closed tomorrow, August 22, 2018, due to flooding in multiple areas of the building. Students will be able to receive a hot meal at @EasternHS tomorrow at 10:45am. Stay tuned for plans regarding Thursday, 8/23 @HTzow_DCPS @dcpublicschools @Mrlockhart

Tuesday’s heavy rains caused flooding in many areas in the D.C. region. In Prince George’s County, Maryland, for instance, some roads were closed due to water. Flooding was also reported in a parking lot, and some had to be rescued from their cars by firefighters.

The wet weather kicking off Wednesday morning may aggravate the still water on the roads.

Because of the rain, a break from the summer humidity is just around the corner. “As the cooler air begins to arrive this afternoon, an isolated shower or two will be possible,” said Bell. There is a 30 percent chance of rain Wednesday and the showers that may be will be short-lived and “not a day-long deluge.”

The soggy weather that soaked much of the region resulted in new rainfall records.

Tuesday’s record of 2.72 inches of rainfall at Dulles International Airport broke the 2014 record of 1.43 inches.

If there are power outages from the storm they will appear on the map below. 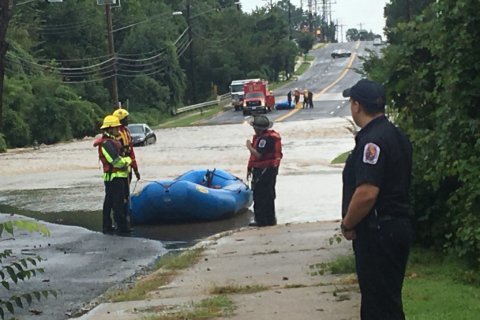