Storm Team 4 meterologist Matt Ritter says that not all areas will see storms, but those that do have the potential to deal with gusty winds and large hail.
(1/4) 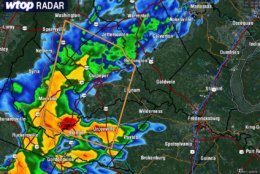 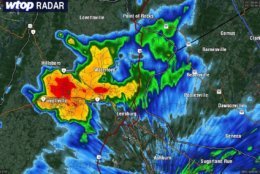 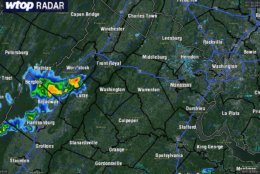 WASHINGTON — Enjoy the sun while you can: Storms have begun to threaten from the south, some of which may be severe.

A severe thunderstorm warning is in effect until 6:45 p.m. in Carroll, Harford, Frederick and Baltimore counties in Maryland.

Warnings for severe thunderstorms in Montgomery and Frederick counties in Maryland and Loudoun County in Virginia expired earlier Sunday afternoon, but areas west of the D.C. area are feeling the severe storm threats.

Storm Team 4 Meteorologist Somara Theodore says the storms have also begun south and west of Luray, Virginia, and the National Weather Service has also issued a severe thunderstorm warning for the Staunton region.

Theodore says storms should clear just before sunset — and shouldn’t have a major impact on the Nationals game tonight.

If you are out grilling on this Sunday evening keep an eye to the sky or on your radar app (@nbcwashington has a great one)-A few storms are possible this afternoon —some of which could be strong. Otherwise, the sun going down at 8:37pm! Enjoy! pic.twitter.com/Q9vojKAnfW

Storm Team 4 Meterologist Matt Ritter says that not all areas will see storms, but those that do have the potential to deal with gusty winds and large hail.

Fortunately, the storms clear out overnight. Temperatures will be in the upper 60s to low 70s, before jumping up to the low 80s for a mostly sunny start to your week.