WASHINGTON — An alert sent in Hawaii over the weekend incorrectly said a ballistic missile was headed toward the island, and the blunder left many people fearing for their lives. The D.C. area hosts many emergency drills — so how likely is it that a similar error could happen here?

On Saturday, the alert went out to phones in Hawaii that a ballistic missile was headed toward the island, sending more than a million people in the Aloha State into panic. The erroneous warning was sent during a shift change at the Hawaii Emergency Management Agency when someone doing a routine test hit the live alert button, state officials said.

Similar drills and tests are common around the country, and are done often in the D.C. area too, said Michael Greenberger, founder and director of the University of Maryland Center for Health and Homeland Security, which works with top emergency responders around the world to develop plans and policies in the event of a catastrophe. However, “it’s everyone’s nightmare that [drills] get confused with reality,” he said.

Great effort is made to avoid that type of mistake, Greenberger said. “I can assure people … that it would be very unlikely that that kind of mistake would happen in the DMV.”

The CHHS facilitates emergency management planning and walks agency personnel through a mock disaster scenario and asks what they would do at various stages of the disaster. During these drills, measure are taken to let the public know there is no threat.

“We operate drills — [during] many of the drills, people run around in T-shirts that say ‘This is a drill.’ That’s how much people worry about this kind of thing happening.”

Taking precautions is vital, because there can be serious consequences if “somebody with a happy trigger finger” reacts, Greenberger said.

D.C.-area emergency management leaders face the same obstacle as other parts of the country — that people might ignore an alert when it is real.

Following the fiasco in Hawaii, changes are being made so that it doesn’t happen again. Moving forward, two people need to sign off on an alert like that, Greenberger said.

“I think that’s a very wise reform that will prevent this kind of thing from happening,” he said.

Greenberger also recommends emergency management leaders be prepared to quickly reverse an alert — one of the reasons it took nearly 40 minutes to tell people the Hawaii alert was an error.

“The biggest problem was that they didn’t have a template ready to reverse the information.”

download audio
January 25, 2022 | The biggest mistakes in the Hawaii missile-alert blunder (Michael Greenberger, founder and director of the University of Maryland Center for Health and Homeland Security, on WTOP) 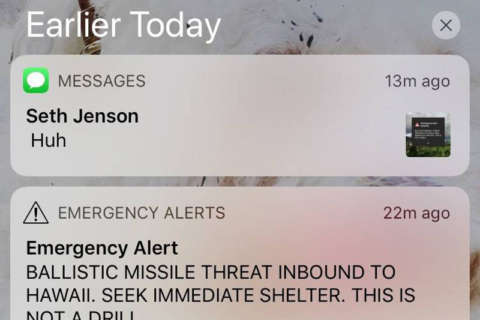 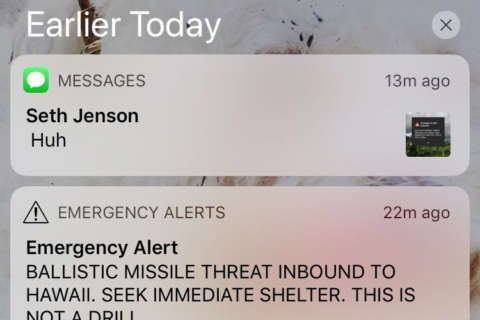