The museum will be the centerpiece of several of Steve Green family's efforts, including sponsoring research on the Bible and promoting a Bible curriculum they hope will be used in U.S. public schools.
Listen now to WTOP News WTOP.com | Alexa | Google Home | WTOP App | 103.5 FM
(1/9) 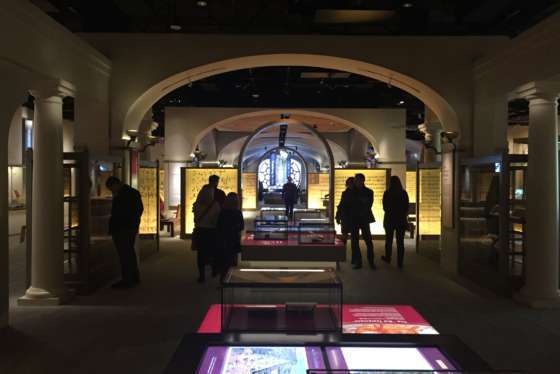 Now, Green would begin collecting biblical artifacts that he hoped could become the starting point for a museum.

On Friday, that vision will be realized when the 430,000-square-foot Museum of the Bible opens three blocks from the U.S. Capitol in what marks the most prominent public display of the family’s deep religious commitment. The $500 million museum includes pieces from the family’s collection from the Dead Sea Scrolls, towering bronze gates inscribed with text from the Gutenberg Bible and a soundscape of the 10 plagues, enhanced by smog and a glowing red light to symbolize the Nile turned to blood.

It is an ambitious attempt to appeal simultaneously to people of deep faith and no faith, and to stand out amid the impressive constellation of museums in Washington. The Bible exhibits are so extensive, administrators say it would take days to see everything.

Green says the institution he largely funded is meant to educate, not evangelize, though critics are dubious. Museum administrators have taken pains to hire a broad group of scholars as advisers. Lawrence Schiffman, a New York University Jewish studies professor and Dead Sea Scrolls expert, called the museum a “monument” to interfaith cooperation. Exhibits are planned from the Vatican Museum and the Israel Antiquities Authority.

“There’s just a basic need for people to read the book,” said Green, sitting in a hotel-style suite inside the museum where visiting dignitaries can stay. “This book has had an impact on our world and we just think people ought to know it and hopefully they’ll be inspired to engage with it after they come here.”

The last major splash the Greens made in Washington was over their religious objections to birth control. In 2014, Hobby Lobby persuaded the U.S. Supreme Court to exempt for-profit companies like theirs from the contraception coverage requirement in President Barack Obama’s Affordable Care Act. That culture war victory has in part colored reactions to the museum even before it opens.

The Oklahoma company also had to pay a $3 million fine and return artifacts after federal prosecutors said they got caught up in an antiquities smuggling scheme. Steve Green said the company had been naive in doing business with the dealers. Items at the center of the fines were never destined for the museum, administrators say. Of the 1,100 items the museum owns, 300 come from the Greens’ personal collection.

But skepticism surrounding the intent of the project has focused more on the Greens’ record of putting their fortune and influence behind spreading their particular religious beliefs. The museum will be the centerpiece of several of the family’s efforts, including sponsoring research on the Bible and promoting a Bible curriculum they hope will be used in U.S. public schools. An initial attempt in an Oklahoma school district was withdrawn following complaints the lessons weren’t neutral.

“The museum is a massive advertisement for the curriculum,” said Mark Chancey, a religious studies professor at Southern Methodist University who has critically analyzed content of the Bible lesson plans.

A new book written by Green and his wife Jackie about how they developed the museum seems to send mixed signals about their goals.

In “This Dangerous Book, How the Bible Has Shaped Our World and Why It Still Matters Today,” the Greens write of the museum, “we’re not creating a place to proselytize.” They also write, “we believe there are multiple applications for Scripture, but only one interpretation,” and “time and time again, evidence has shown the Bible to be accurate.”

Still, the museum avoids debates over interpreting the Bible, and over contentious issues such as evolution and marriage.

Separately, critics have seized on a changing mission statement of the museum from its earliest days, when founders said they aimed to prove the authority of the Bible, to a new, more neutral goal of inviting people to learn more about the Bible. Museum president Cary Summers described the change as a natural progression as the project moved ahead.

But John Fea, a historian at Messiah College in Pennsylvania, points to the family’s goal of helping people “engage with” the Bible as a telling indication about what the Greens hope to achieve. He said the “Bible engagement” concept was popularized by the American Bible Society in the 1990s amid concern that people who owned copies of the Scriptures weren’t necessarily reading them.

Fea said advocates for this strategy ultimately hope the Bible will inspire a desire to learn more and maybe accept Christ.

“There’s a public face to this Bible engagement rhetoric and then there’s a private aspect of what it really means,” Fea said. “It debunks the whole notion that this is just a history museum.”

Green’s response to such arguments: Visit the museum and decide for yourself.

Located near the National Mall, the building alone has been designed to inspire a sense of wonder. The Gutenberg gates flank the entrance. A 140-foot LED display runs the length of the entrance hall ceiling, bathing the lobby in a changing array of color. The floors are a mix of shimmering marble from Denmark and Tunisia, complemented by columns of Jerusalem stone. From two high stories, a glass atrium curves from ceiling to floor, echoing the shape of a scroll and providing a clear view of the Capitol dome and the Washington Monument.

A section dedicated to the Bible’s modern-day influence includes a replica of the Liberty Bell, inscribed with a verse from Leviticus, and exhibits touching on slavery, abolition and the civil rights movement. A motion simulator called “Washington Revelations,” creates the sensation of flying over the nation’s capital to see Bible inscriptions and references in buildings and monuments throughout the city.

The ceremony opening the museum aims to underscore a message of inclusivity, and will feature, among the dignitaries, a rabbi and two Roman Catholic cardinals bearing a message from Pope Francis.

“I think people will come in here and will be surprised at how much this book has impacted their life in ways that they probably don’t even know,” Green said.