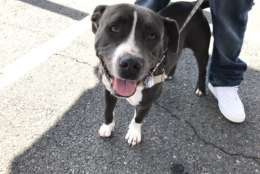 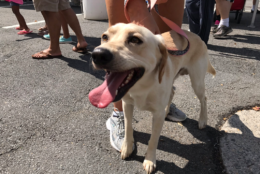 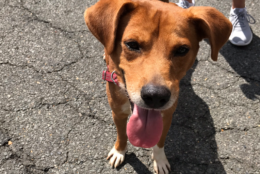 WASHINGTON — About 120 animals, which were already up for adoption in Louisiana when Hurricane Harvey hit, arrived in Manassas, Virginia, on Saturday and were received by several area shelters.

The Lost Dog & Cat Rescue Foundation, a Northern Virginia nonprofit, accepted more than 20 dogs from that transport, and many have already found foster or forever homes in the region.

Several of the pooches from Louisiana were brought to the group’s annual Labor Day Weekend Adoptorama at the Falls Church PetSmart.

Odetta Dietz of Warrenton adopted a cutie named Jones, and said her grandson will give him a new name.

“He seems very sweet, a little bit thin, so I think he’ll just need a little bit of love and he’ll be good,” she said.

Diana Vanegas of Annandale agreed to foster a pit bull named Nadia, after she saw how well the dog interacted with her young son.

The dog tested positive for heartworms, but Vanegas plans to formally adopt Nadia after that treatment is finished.

“We’ve helped these shelters in the flooded areas empty out, so that they have space for displaced animals. And they’re going to focus all their energy on reuniting those animals with their families, which is really great, and we’re so happy to facilitate that. We’ve learned so much after Hurricane Katrina,” said Barbara Hutcherson, the foundation’s acting director.

Next weekend, the foundation expects to receive at least another 20 dogs from areas hit by Harvey.

“We will continue to be bringing in more animals and helping in every way that we can, so we’ll need support through the long term,” Hutcherson said.

Get more information about how to foster or adopt and animal — or donate — on their website.