WASHINGTON — The American University police are still trying to identify the suspect who hung Confederate flag posters, each with a stalk of cotton attached, on bulletin boards in four campus buildings Tuesday night.

Tips are still coming in, but Phillip Morse, assistant vice president of university police services, told WTOP, “No identification has been made at this time.” He added, “We’re continuing our review of security video, and clearing tips as we get them.”

The posters read “Huzzah for Dixie” and “I wish I was in the land of cotton” — references to the Confederacy.

University police have released three short videos that show the suspect walking through campus buildings, at about the time the posters were hung.

The suspect is believed to be a white man, about 40 years old and 5 feet, 10 inches tall. He was last seen wearing a pink shirt, orange hard hat, camouflage pants, and off-white gloves. In the videos he is wearing a reflective yellow vest.

A spokeswoman with the FBI Washington Field Office said university police have not enlisted the help of the bureau.

“The FBI is not currently involved in this investigation,” said spokeswoman Nicole Schwab.

Schwab said there are no recent updates in the May 2017 American University case that the FBI is involved in, in which bananas were hung on campus in nooses.

As police seek to identify the person, it remains unclear what charges police and prosecutors might seek in the case. The postings angered and frightened many students.

The posters were placed the same night the school held a presentation introducing its new  Antiracist Research and Policy Center.

According to the crime alert, the incident is described as “Defacing property — bias related.” As police scour social media, they will be looking for postings which might provide a motive. 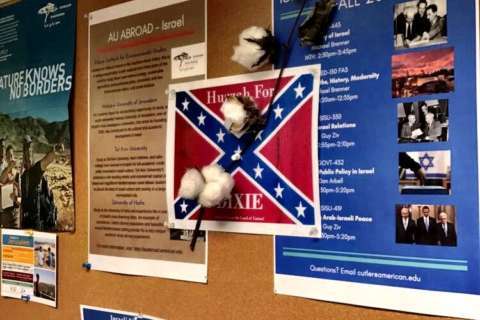