"It's happening all over the place," said Mike Johnston, owner of the Maryland shop Ellicott City Motorsports, which was hit twice in a 10-day span. "It's a huge inconvenience."
Listen now to WTOP News WTOP.com | Alexa | Google Home | WTOP App | 103.5 FM
(1/3) 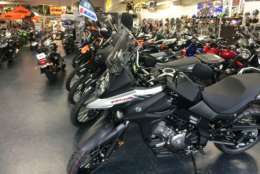 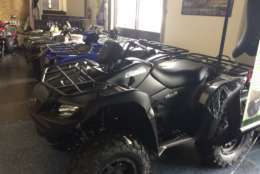 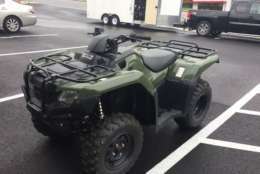 ELLICOTT CITY, Md. — As police departments in the D.C. region search for gangs that illegally drive dirt bikes and all-terrain vehicles, more of those vehicles are hitting the streets as businesses that sell them are targeted by thieves.

Johnston’s store was recently hit by thieves twice over the course of 10 days. Each time, the criminals took five dirt bikes. They were eventually caught by police.

“Almost all these bikes end up in the city streets,” said Johnston. “It’s a common problem across the country.”

Between 150 and 175 ATVs and dirt bikes were stolen from dealers last year in Maryland, Virginia and Pennsylvania, Johnston said. “We all have sophisticated alarm and camera systems; unfortunately, determined thieves are a problem.”

The use of dirt bikes and ATVs on area roads is illegal, but that does not stop riders from ignoring laws and weaving through traffic. Late last month, videos posted on social media showed dozens of riders going through streets in D.C. and the National Harbor area.

Police in Prince George’s County and in the District are asking for the public’s help identifying and tracking down people who illegally operate the vehicles.

The struggle for police departments is that rarely do the riders pull over for police. Murtha, who oversees patrol officers around National Harbor, said officers have limits on what they can do.

“We will not go out there and chase these folks and do things that put us at risk and put the citizens at greater risk,” he said.