The struggle for area police departments is that rarely do the riders pull over. Officers are limited in what they can do to stop the engine-revving, wheelie-popping gangs.
Listen now to WTOP News WTOP.com | Alexa | Google Home | WTOP App | 103.5 FM

WASHINGTON — With the warm weather, area police departments are stepping up patrols and preparing for more calls involving gangs of dirt bike and all-terrain vehicle riders.

“For those that engage in it, we just want you to know that you’re not safe,” said George Nichols, deputy chief with the Prince George’s County Police Department. “We are coming for you.”

During such rides, many ignore traffic laws. The use of dirt bikes and ATVs on area roads is illegal as well. This weekend, videos posted to social media showed one such group weaving through the streets of D.C. and the National Harbor area.

The struggle for police departments is that rarely do the riders pull over for police. Murtha, who oversees patrol officers around National Harbor, said officers have limits to what they can do to stop the engine-revving, wheelie-popping law breakers.

“We will not go out there and chase these folks and do things that put us at risk and put the citizens at greater risk,” Murtha said.

After initially trying to intercept them, Murtha said, officers turn their focus to getting in front of the group and warning crowds ahead. Another option for the department is getting support from the air. One thing that the riders cannot escape is a police helicopter, Murtha said.

“When our Air One is up and over the top of them, we will follow them to where they go,” Murtha said.

The use of video is also key, according to Murtha and Nichols. Many times, arrests are made and suspects are identified not only by security footage but also by smartphone videos. Those who are caught face having their vehicle confiscated and possibly jail time, depending on the charges.

The department also teams up with gas stations and businesses in areas where the bikers are likely to gather, with the hopes of moving in before the riders are in motion.

“Some of our best resources are when we partner with the community or when the community gets fed up and partners with us,” Murtha said. 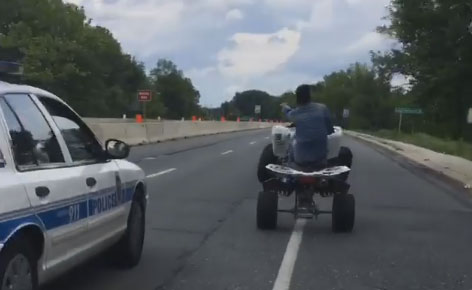