The suspects face a maximum of 10 years in prison if convicted. Authorities have yet to comment on whether any of them could be involved in the burglary of a gun store in Rockville, Maryland.
Listen now to WTOP News WTOP.com | Alexa | Google Home | WTOP App | 103.5 FM

WASHINGTON — Three suspects described as lightning-fast burglars have been arrested in a series of three area gun store thefts over the last 10 days.

A news release from the U.S. attorney’s office for the eastern district of Virginia states that all the men are “local,” suggesting that they may live in Alexandria.

The men face a maximum penalty of 10 years in prison if convicted.

In the March 11 burglary of 50 West Armory in Chantilly, Virginia, the men allegedly stole 35 semi-automatic handguns in 45 seconds. Holmes, Jones and Quarles are also believed to be responsible for burglarizing ASH Tactical and SSG Tactical in Fredericksburg, Virginia, on March 14.

Scott Wahl, a manager at the Chantilly store, said the burglars busted the glass in the front door, destroyed display cases and took $25,000 worth of firearms. 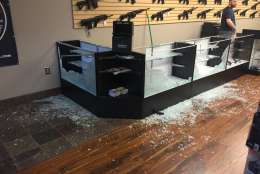 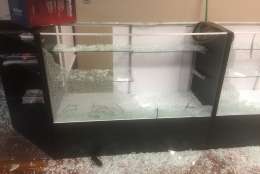 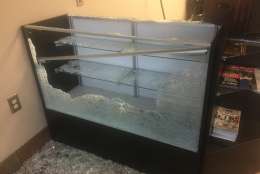 With the serial numbers on record and a database of all the guns missing, Wahl said, the people who took them were limited in what they could do with them.

“They’re almost worthless to anybody, other than a criminal who is going to sell them to another criminal,” he said.

Police in Maryland believe at least two suspects were involved in the March 9 burglary of United Gun Shop in Rockville.

Federal and local authorities have yet to comment on whether the Maryland and Virginia burglaries are believed to be related.