WASHINGTON – Police investigating the deaths and disappearance 40 years ago of two Montgomery County sisters say they are now turning their focus onto the uncle of the man indicted for the girls’ murders, and also suggested a motive for their deaths.

Investigators reiterated Thursday that they believe others were involved in the disappearance of Katherine Lyon, 10, and Sheila Lyon, 12, who were last seen at the Wheaton Plaza on March 25, 1975. Lloyd Lee Welch, 58, was indicted last week on first-degree murder charges for their deaths in Bedford County, Virginia – more than 200 miles away from the girls’ home.

“They were killed in order for their captors to escape detection,” said Mike Brown, sheriff of Bedford County during a news event there.

He said that the girls were abducted so they could be sexually abused and exploited. Their bodies have never been found.

As prosecutors prepare to try Welch, Brown said his officers will focus on identifying “those individuals who aided or assisted in this horrible crime.” But unlike past references to unknown “others” involved, police are now naming names.

Specifically, officials pointed to Richard A. Welch Sr., Lloyd Welch’s uncle, whom police previously named as a person of interest in the case. His wife Patricia Welch, of Hyattsville, has already been charged with perjury for lying to a specially convened grand jury that is assisting in the probe.

“He remains and will be a primary focus as we move forward now that Lloyd Welch has been charged,” said Randy Krantz, the commonwealth’s attorney for Bedford County.

Welch Sr. is more than 70 years old and once worked as a security guard in the Wheaton area.

A day earlier in Montgomery County, Krantz said that he was still evaluating whether to charge anyone else for hindering the investigation. But those involved could face much more serious charges, he said Thursday.

Anyone who helped Lloyd Welch with the abduction could also be charged in connection with the girls’ murders under Virginia law, Krantz said.

In search warrants previously made public, Lloyd Welch says that he last saw the girls at his uncle’s house and that he saw his uncle, Richard Welch, sexually assault one of them. Lloyd Welch also told police that he left the Wheaton shopping center with the girls and his uncle.

Another search warrant suggested that the girls could have been burned. Henry Parker, a cousin of Lloyd Welch, recently told investigators that he helped Welch remove two duffel bags from Welch’s vehicle in 1975 and that they “smelled like death” and weighed 60 to 70 pounds each. Parker told police that the bags were thrown into a fire at a property on Taylor’s Mountain in Bedford County.

During a search of the property, police seized possible bone fragments and burned debris.

Parker and his sister Connie Akers are also part of their investigation, said John McCarthy, state’s attorney for Montgomery County.

“We remain focused on investigating, not only Lloyd Welch, but Dick Welch, Pat Welch and Henry Parker among just a few. There are others that we are focused on,” said Captain Darren Francke, who leads Montgomery County’s major crimes unit.

Officials also pleaded with residents of Bedford and the Welch family who live there to step forward and provide what information they know. And they reiterated that they would be willing to charge those who intentionally lie to police or the grand jury, referring to a conspiracy to thwart police.

“There are people that are throwing us roadblocks constantly that are trying to lead us in other directions,” said McCarthy. “There are good folks in Bedford. I believe there’s someone out there that knows a lot more than they’ve shared so far.”

Brown said his staff will work with the Southern Virginia Internet Crimes Against Children Task Force and the National Center for Missing and Exploited Children to continue investigating Richard Welch’s involvement along with the possibility that Welch exploited other children.

Brown said that anyone with information about the Lyon sister’s disappearance or Richard Welch is asked to call 434-534-9521 or to submit a tip through MissingKids.org.

In the meantime, Krantz said he has filed the initial paperwork needed to bring Lloyd Welch to Bedford County from a Delaware state prison. It could take a month or two before Welch would be transferred.

Welch is a convicted sex offender and he has been incarcerated in Delaware since 1997 on charges related to sexually assaulting a 10-year-old girl.

According to the Delaware Department of Correction, Welch was convicted of unlawful sexual intercourse and unlawful sexual penetration and is serving a 33-year prison sentence. 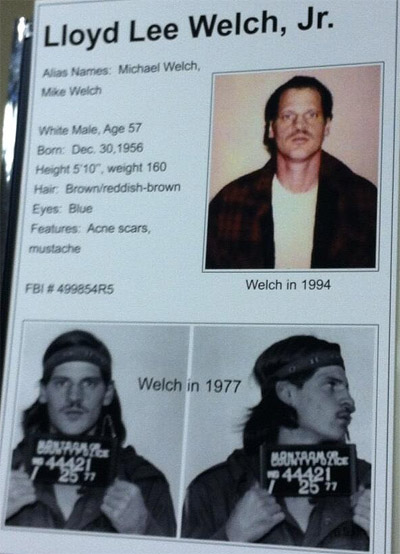