With help of City Bikes, customer gets stolen bike back

WASHINGTON — On Sunday, a customer at City Bikes in Adams Morgan went to the shop to get an estimate…
Listen now to WTOP News WTOP.com | Alexa | Google Home | WTOP App | 103.5 FM
(1/4) 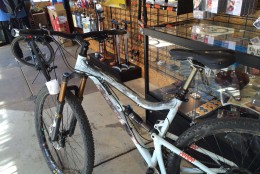 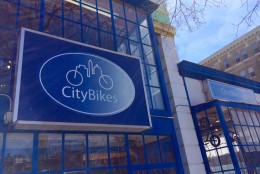 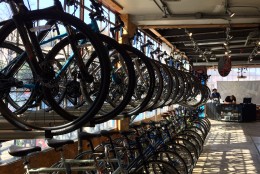 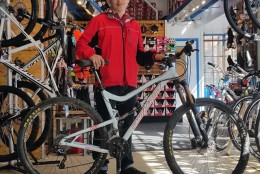 WASHINGTON — On Sunday, a customer at City Bikes in Adams Morgan went to the shop to get an estimate for a repair to his Santa Cruz bike. The staff explained they couldn’t complete the fix that day, so he rode home. But he didn’t get all the way home by bike.

Suspicious, Fitzmaurice checked with City Bikes General Manager Saul Leiken and they decided to call police immediately. In the meantime, the person who was in possession of the bike wanted to get an estimate on the same repair the bike’s owner had asked about on Sunday. Apparently deciding against the expense, he left the shop. But because the bike wasn’t working properly the guy walked it as he left the shop and milled around the neighborhood.

Leiken says because he wasn’t wearing a City Bikes T shirt, as staffers do, he decided he’d follow the guy with the bike until police arrived. “When he left the shop, I decided to follow him from about a block or two behind. Sure enough, about ten minutes later we had four police officers at the shop.”

Leiken and Fitzmaurice had been keeping in touch by phone, and Leiken placed the guy with the bike outside the nearby Starbucks. “Next thing I know there are two bike officers speaking with him … and that was that!” Leiken says. The man was arrested.

Fitzmaurice says the fact that the customer had reported the theft to police and let City Bikes staffers know his bike had been stolen helped get the bike back.

Fitzmaurice and Leiken also say rapid response from the Metropolitan Police Department was critical. Police dusted the bike for fingerprints, and Fitzmaurice says police identified the man who’d brought the bike in for repairs as the suspected bike thief.

The customer’s relieved, how about the bike? Fitzmaurice says, “The bike’s in rough shape, it needs some more repairs after it was taken.” But he says it’ll be repaired and back in the customer’s hands soon.

Speaking of bike theft recovery efforts, Fitzmaurice says, “It’s the second time I’ve been involved in one for our customer — so it’s always rewarding to get one back after we hear so many stories of people losing their bikes that they love and put a lot of time and effort into.”

Some things you should do: