Overturned tanker spills fuel, closes stretch of I-95 in Md. 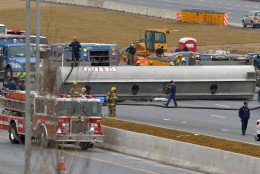 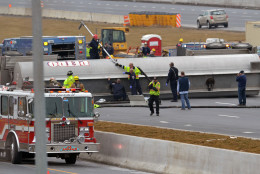 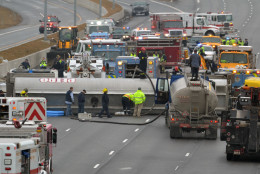 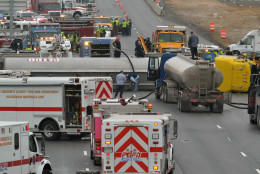 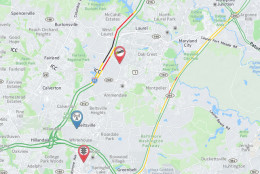 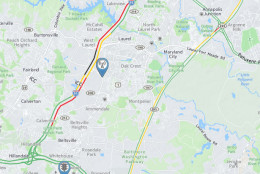 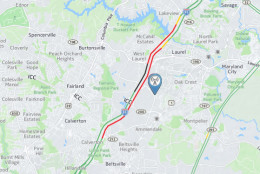 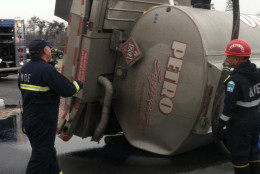 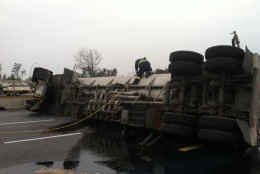 WASHINGTON — All lanes in both directions of Interstate 95 are now open  more than seven hours hours after a tanker truck overturned, spilling hundreds of gallons of fuel on the highway in Laurel.

The closure before the Intercounty Connector created major backups throughout the day as drivers heading north and south became mired in the delays or tried to work around the wreck. Two southbound lanes of traffic were opened beginning about 3:30 p.m. as the cleanup continued. The northbound lanes were reopened earlier.

Multiple vehicles were involved in the 10:15 a.m. crash but only minor injuries were reported.

However as many as 700 gallons of biodiesel spilled from the tanker, which had a golf-ball sized hole in one section of the tanker and a smaller hole underneath. Responding crews were able to stanch the flow of the fuel, which is considered safer to handle than gasoline, according to the Prince George’s County Fire Department.

Another 400 gallons of biodiesel was captured in drums. The remaining 6,400 gallons of fuel was pumped into another tanker truck, according to the fire department.

The damaged tanker was eventually hoisted upright and towed from the road allowing hazmat crews to continue cleaning up the spilled fuel. A contractor may be needed to complete additional environmental remediation, which could take several days, says Assistant Chief Paul Gomez.

Most of the fuel was contained on the roadway and did not enter storm drains, according to the Maryland Department of the Environment.

The crash left the tanker on its side, stretching across all lanes of the interstate. Aerial footage showed that it had hit a jersey barrier and leaking fuel had pooled on the pavement.

Southbound traffic had been diverted at Md. Route 198 but was eventually allowed to use the local ramp to Konterra Drive to continue past the ICC and back onto I-95. Northbound traffic meanwhile was funneled into a single local lane, but all lanes have since reopened to vehicles heading toward Baltimore.

At its peak, traffic backups stretched for 8 miles, according to the Maryland State Highway Administration.

6 lions, 3 tigers at Smithsonian National Zoo being treated for COVID-19